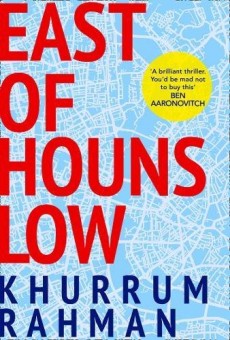 Javid Qasim is 20-something, lives with his mum and deals a little cannabis. He wears his Muslim faith lightly, until events compel him to become more committed.

Javid, or Jay as he prefers to be called, is a spoiled young man with a single mum who has always taken care of him. He has a name as a lightweight with his friends, all like him Muslims of Pakistani origin from the same tight community. A job would take more effort than he is prepared to invest, and he makes a modest income selling skunk to students. A weekly visit to the local musjid is the extent of his religious observance, and he feels nothing in common with the terrorists he sees on the news.

Jay is under observation, however. When he gets involved in a brawl to protect a friend and leaves his car unlocked, he loses money and dope owed to Silas, a vicious supplier. He is arrested and given a choice: inform on Silas and help MI5, or go to jail. Jay takes the easy way out. He spends more time at the mosque playing the newly energised Muslim, and finds it surprisingly easy to move into more radical circles.

In fact, MI5 are not the only ones who find Jay of special interest, for reasons which become apparent later, and he is quickly drawn into a world of Islamic extremists. His mother is away in a new relationship, he has fallen out with the more balanced of his friends, and his MI5 handler offers little by way of support. The future looks like being challenging, and it is not clear whether Jay will be able to make the right decisions.

The majority of this story is told in the first person by Jay himself, who is revealed as a lazy and weak young man whose emotions often get in the way of clear thinking, although at heart someone who cares about others. His behaviour is erratic, and the reader is never entirely assured about his commitment to either side, creating a tension which is not released until the final pages.

Sympathy for the protagonist is enhanced by the lack of concern about his welfare by those using Jay, revealed in occasional third person passages. Parker, his handler, a former soldier mentally scarred by his experiences, is less inclined to push Jay than Lawrence, another in the team monitoring progress. Conflicts between the two quickly become personal, although based in rational argument about the most effective way of employing the asset.

Events move towards a horrific conclusion. Those looking for a complete explanation to such events will perhaps not find it here, but the book explores convincingly the way in which ordinary people can end up contributing to something so repugnant.