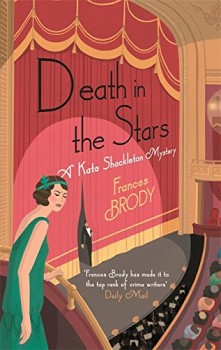 Death in the Stars

It’s always a pleasure to pick up a new Kate Shackleton adventure. Cosy they may be, boring they never are. This is Frances Brody’s ninth novel featuring the free and independently spirited woman detective.

Kate, a widowed former VAD – those mainly upper-class girls who forced their way to the Western Front to nurse under appalling conditions – is a clever and determined member of a group of woman matured by experience and with little room for frivolity. Intelligent, resilient and persevering, she is human enough to seem a little weary of her investigative role at times and the way she is often under-appreciated – particularly by men – but this merely serves to make her more endearing.

Well-researched historical details, local knowledge, and some charming descriptive writing with vivid evocations of time and place make all the stories a great read. But this one, which opens with the brilliantly described solar eclipse of 1927, then transports itself into the fading days of music hall, is probably Brody’s best yet.

Kate is approached by the darling of the halls, the Silver Songbird, Selina Fellini, a local Leeds girl and daughter of a huge family of Italian ice-cream makers, to accompany her to a viewing party for the solar event.

Kate suspects an ulterior motive, and when during the eclipse, Selina’s old friend and co-star comedian Billy Moffatt disappears and is later found dying in the grounds of the famous public school they are visiting, knows she must dig deeper and soon learns two other members of the theatre troupe have died in the last year in similarly mysterious circumstances.

This is a solid, old-fashioned, murder mystery with the obligatory red-herrings to keep Kate and her collaborators, ex-policeman Jim Sykes and Mrs Sugden, the archetypal Yorkshire housekeeper, as well as the reader, entertained, as they are led down blind-alleys.

With more than a nod to the Golden Age authors, the not-so-hard to guess denouement is delivered with all the panache you’d expect from a showbiz tale. And it is that vaudeville glitz, the performing pony, the chorus girls, the strongman and the memory act, which give this story such a fabulous setting.

That, plus characters richly evoked and distinct on the page, a magnificent description of the almost pagan mania which greeted the eclipse and some very pointed comments on the problems of physically and mentally injured soldiers from the war – Selina’s husband Jarrod, subject to violent mood swings, and Billy, addicted to cocaine to dull the pain – add realism.

But it is the sheer ordinariness of Kate, her friends and her surroundings, which makes this charming tale – and her other adventures – such great reading. Filled with gentle humour and unmistakeable Yorkshire attitudes, these are as good a description of the life of a bright, independent northern woman in the 1920s as you are likely to find.