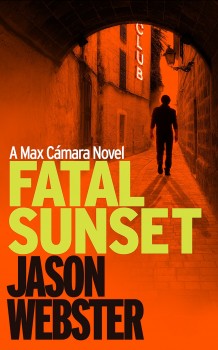 Valencia Chief Detective Max Camera is moved to the Homicide Section and assigned to a dubious case, but finds plenty in the death to keep him busy.

Max Camera and his colleague Torres of the Policia Nacional are abruptly pulled off their work tracking down terrorist cells and informed such work is now to be the exclusive province of the Centro Nacional de Inteligencia (CNI) in Madrid. His boss Rita Hernandez, who finds Camera’s anarchic working methods anathema, takes the opportunity to break up the pair and sends Camera back to Homicidos.

To add insult to injury, she immediately assigns him what looks on the face of it like a routine death: a nightclub owner who has succumbed to a heart attack. But Max soon finds that the club, located miles out of town, was unpopular with locals and was a centre for drug distribution for the district. He pokes around and provokes a very hostile reaction – so hostile that he has to run for his life.

At home Max’s journalist girlfriend Alicia seems to have shrugged off the mental scars from the kidnapping suffered in Blood Med. She is currently out of a regular job, but receives a call from an old student friend with an odd story. His wildlife research on Cabrera, a small island south of Majorca, has been brusquely interrupted by a military take-over. Alicia’s attempts to find out more are blocked in a very particular manner.

The reader is then made privy to the activities of a CNI officer, Carlos, who is tasked with closing down any leaks about the activities on Cabrera. Whatever is planned for the island, the men responsible for implementation take their duties very seriously, and consider themselves authorised to take whatever sanctions they deem necessary to maintain secrecy. Alicia only belatedly realises the danger to which she is exposed.

In this, the sixth in this excellent series, Camera continues to exhibit an appealing informality and unorthodoxy, coupled with a gritty determination to expose wrongdoing which gets results. There is little doubt about his left-wing sympathies, notwithstanding his instinctive liking for traditional foods and modes of behaviour. The fund of proverbs inherited from his grandfather Hilario still appear from time to time.

As usual, however, behind Camera’s crime-fighting Webster sketches out shifts in the body politic which threaten the well-being of ordinary people. He suggests all too convincingly that there remain people in authority who hold extreme views and are prepared to use whatever weapons lay to hand to achieve their political ends, even if this means violence and a negation of the public interest.