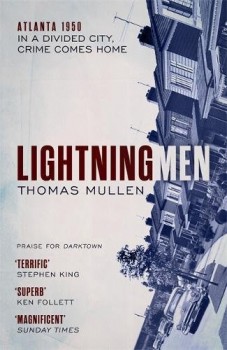 In post-war Atlanta, police on both sides of the racial divide struggle to contain criminals exploiting the tension, especially when family and friends are involved.

In 1950, Atlanta is experiencing a big increase in the black population, and the movement of black families into previously all-white neighbourhoods is leading to anxiety amongst whites. The Klan and other racist groups, including The Columbians who display SS lightning badges, are ready for action, and with many police in these organisations there is little hope that the authorities will ensure justice.

In the police department, exposure of corruption has enabled progressive interests to demand the recruitment of the first black officers. These are recruits of high calibre often with recent military experience, but are restricted to black neighbourhoods and hampered in their efficiency by the hostility of their white counterparts.

Against this background we are introduced to police officers from both sides. Denny Rakeshaw is a sympathetic white officer who, against his better judgement, finds himself on the wrong side of the law, thanks to his brother-in-law Dale. Dale is induced by an unfamiliar fellow Klan member to carry out an attack on a white man, which ends in a death. The results play out through the book, and it is only near the end that we find out who instigated the assault, and why.

Lucius Boggs is an officer from a patrician black family who struggles to come to terms with the squalor and deprivation at the low end of the black community. His family are less than impressed with the woman he has chosen as his fiancée, a single mother. The arrival on the scene of the father of Julie’s son after a long stretch in prison leads to exposure of secrets which Julie has long concealed, to Boggs’ consternation.

Mullen is a natural storyteller, and the lives of Rake, Boggs and various others drawn together by the action are animated by brief but telling details as to their circumstances, and an exploration of their lines of thought. The constraints which prevent most of the featured characters living up to the highest principles are made evident, and lapses in behaviour explained, if not entirely excused.

Behind an engaging story and challenging action for the protagonists, the friction between the races is ever at the forefront of the story, and the detail is at times jaw-dropping. The sheer force of the daily ration of insults borne by the black officers is enough to make any white person ashamed by association. With, on one side, a community treated inhumanely on a routine basis and on the other a privileged minority fearful of losing their status, the value of their houses, and what they regard as civilised values, the stage is set for a major conflagration.