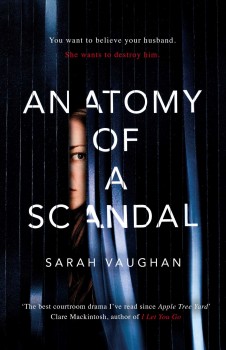 Anatomy of a Scandal

A politician close to the centre of government stands accused of rape. The barrister for the prosecution is certain he is guilty and is determined to make him pay.

There are occasions when a work of fiction emerges with a tale familiar through current media preoccupation, and this is certainly the case here, the story of a powerful politician who uses his charisma to extort sexual favours. He also happens to be one of those ‘preening, entitled young men’ out of Eton and Oxford, another character type making regular appearances in the news with the perception that they increasingly constitute the upper ranks of so many fields of employment.

The impact of the central character, James Whitehouse, is explored mainly through the experiences of two women. His wife, Sophie, recognised James from their first meeting at Oxford as someone of the right class who has the requisite charm, brains and drive to make him an eminently suitable partner. Now in her 30s with two young children, however, she begins to recognise how little she truly knows her husband, and revelations about his extra-marital exploits give rise to a period of intense self-examination.

The other woman is Kate, a barrister who specialises in cases of sexual abuse. She comes across as gifted and driven, but with emotional wounds which make it very difficult to form personal relationships, particularly with men. Her story is told in the first person and it becomes clear that she has a very personal reason for heading the prosecution when James is accused of rape by a young colleague.

As so often is the case, a conviction for rape comes down to a judgement between two irreconcilable versions of events. Here both parties get their chance to persuade a jury, and we also get commentary by Kate on the evidence as it unfolds, the significance of key revelations, and the points which tell for one side or the other. Conviction in this particular instance always appears likely to be difficult, but the result remains finely balanced. And regardless of the result, neither party will emerge from the case unscathed.

While the author does a creditable job exploring the feelings of the major players in this drama, it is not always easy to feel a great deal of sympathy for any of them. James and Sophie both have such a sense of entitlement that the reader is apt to relish any problems which blight their otherwise perfect lives. Kate’s experiences in contrast make her a person to pity, although it turns out she is prepared to put her client’s case at risk for her own purposes.

The book is told in the present tense throughout, which helps to sustain an atmosphere of intimacy, and those who enjoy the slow playing-out of loyalty and betrayal in personal relationships will find plenty to enjoy.