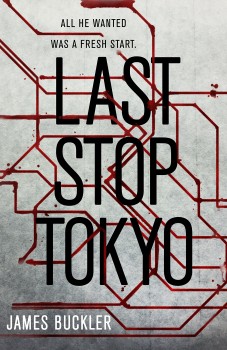 Alex Malloy has fled disgrace in the UK to Japan, but his life gets even more complicated when he meets Naoko, who like him has a past she is trying to leave behind.

Alex Malloy is teaching in Tokyo, as far as he can get from England where his legal career and his reputation were lost in a single traumatic incident. His only contact in Japan outside work is Hiro, once a fellow student in UK. Through Hiro he meets Naoko, with whom he forms a relationship.

Naoko works in an art gallery, a job which does her credit and shows considerable commitment given her deprived origins. But Alex realises that, like himself, Naoko has some secret which she is at pains to conceal. Unfortunately, Naoko has a rival at work, and the appearance of Alex provides the opportunity for some devilment.

Naoko’s fears that Alex may have derailed her life plans lead to an argument following which the police become involved. Naoko makes some decisions which have terrible implications for Alex, who is put in a situation where accepting the help of organised crime looks like the only recourse. The pair soon reconcile, but by this time the chances of them outrunning their luck start to look slim.

This is a first novel by a writer who has worked in film and TV, which may be one reason why it is easy to envisage it as a screenplay. The action is largely chronological, with flashbacks in italics to the incident which brought Alex to Japan. A prologue anticipates later events with Alex in a dramatic scene at an airport, but this does rather detract from the later portion of the book leading up to the incident which the reader has already been told about.

My main difficulty with the book was, however, the unbridled stories of woe emerging from the two protagonists. Every time you think things couldn’t get worse, they get worse, and often through their own fault. Alex in particular makes several nonsensical decisions, as though determined to ensure disaster. The author recognises this to the extent of having Naoko charge him with this tendency, but I still found such wilful disregard of self-interest difficult to swallow.

Japan comes across as very cold, with practically all the characters that the couple come across being entirely dedicated to their own welfare, and prepared to do the most terrible things to others. No doubt the author plays up this aspect to reinforce Alex’s feeling of isolation, but even in a place as wary of foreigners as Japan I think you would have to be very unlucky to find the population so universally hostile.

Anyway, the reader naturally feels for the two main characters, despite the tenor of the narrative suggesting from the off that any hope for a happy ending is a very remote likelihood. With little prospect of relief, one can describe this perhaps as a cautionary tale.