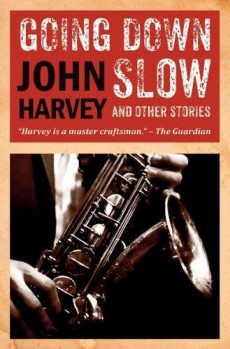 This slim volume of seven stories provides an easy introduction to the work of John Harvey, writer of poetry, young adult fiction as well as full-length crime novels. Included are two stories featuring Charlie Resnick, a policeman who has featured in 11 full-length books, and three where London PI Jack Kiley takes centre stage.

Resnick is based in a city said to be identifiable as Nottingham; certainly the content of the tales do nothing to contest the view that it’s a grim place. In Not Tommy Johnson, Resnick investigates the death of a 16-year-old; in Going Down Slow he is undone by grief following the death of his wife, even as an old friend is dying from cancer.

In Ask Me Now Resnick’s colleague Whitemore struggles to cope with his wife’s departure and the problems his son is having with a new stepfather, while in parallel his intervention does little to help an ex-military man having problems adjusting to life as a father in civilian life.

Resnick and Whitemore are both jazz fans, as is PI Jack Kiley. In Second Chance, Kiley helps a woman threatened with exposure of past indiscretions. Fedora explores the concerns of a man guilty of sexual offences long ago, worried about prosecution in the current atmosphere. In Dead Dames Don’t Sing a novel by a dead poet is unearthed. Kiley is asked to investigate whether the book is kosher and meets an antagonist worthy of Chandler.

The book is rounded off with Handy Man, told from the point of view of a woman who benefits from the assistance of Harry, an ex-soldier whose skills go beyond those of home maintenance. I enjoyed this story, which left a substantial ambiguity about the extent of Harry’s help.

Short stories call for some subtlety in getting sufficient information to the reader quickly and without it being too obvious, and Harvey manages this effectively. He can also quickly convey mood, and the writing has a direct and concise style. The question is really whether you enjoy reading about his characters.

Harvey’s protagonists are men of a certain age, ex-military or police, who have suffered a certain amount of disappointment, and make no excessive demands on life. While their views are unexpressed you feel a sense of disapproval, or perhaps bafflement, about the world they face. The liking for jazz is indicative: a musical form which was always a minority interest, with devotees becoming an ever smaller group. There is, however, no denying the power of the writing.