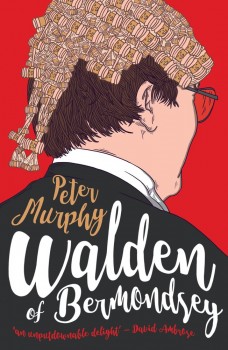 Resident judge Charlie Walden relates several tales featuring life in Bermondsey Crown Court, both in the courtroom and behind the scenes.

These tales from the Bermondsey Crown Court are told in the first person by Charlie Walden, who as resident judge takes on administrative responsibility for the work of the court as well as his own cases. The position enables him to give an amusing account of some of the more interesting cases which cross his bench, as well as other matters which threaten the smooth running of the administration of justice.

The book is divided into six chapters, each featuring a case brought before the judge: arson, fisticuffs between politicians, impersonation of a solicitor, attribution of a painting, extra-territoriality and operation of a brothel. In each we get extracts from the more telling speeches of counsel or crucial bits of evidence in court, with the rest succinctly summarised to round off the story in the space available.

While these are all criminal cases, proceedings are depicted in a light-hearted manner, and indeed most of the cases seem to have been selected to highlight the more comic aspects of criminal prosecutions, with odd aspects of the law brought to light.  In parallel to each case is the latest headache for Charlie in the administrative realm: a visiting High Court judge, defacement of one of the portraits made by tradition of resident judges, or a threat to the court kitchen.

Charlie’s biggest bugbear is what he terms the ‘grey smoothies’, the business-suited administrators forever attempting to force economies on the courts. These overseers and their management speak sound very familiar; there is no reason why the law should be uniquely exempt from their ministrations but many will cheer the small victories Charlie achieves in the course of the book.

The author has the benefit of a career in law, including time as a judge, and the mental perspective strikes one as close to that found in the novels of Henry Cecil, another judge who turned his experience on the bench into light fiction. There is no doubt which class the protagonist belongs to, and there is a faint whiff of superiority assumed, as in the universal reference to the defendant as ‘Chummy’.

While perhaps a little complacent, however, Charlie comes across as very decent and with surprisingly liberal views, and the book is amusing enough to hold the interest for over 400 pages. The legal context does nonetheless inevitably bring Rumpole to mind, and there is no doubt Charlie Walden suffers by comparison. Perhaps judges are bound to be unsympathetic by the very fact of their position. Walden’s recurring nightmare is the risk of appearing as ‘Top judge’ in tabloid headlines, as in: ‘Top judge in sentencing scandal’, and one can sympathise with his concern.