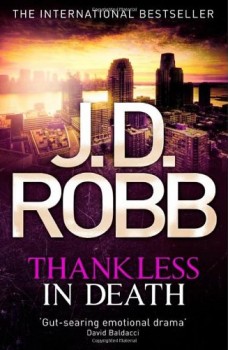 Jerald Reinhold is planning to kill everyone who has ever slighted him. It is the job of Lieutenant Eve Dallas of the NYPSD to stop him, but how does she identify the next victim and get one step ahead of the killer?

Jerald Reinhold thinks the world owes him a living. He is convinced that everyone in his life, from his parents to his teachers to his bosses to his girlfriend, has held him back, failed to see his potential and generally made his life a misery. On the Friday before Thanksgiving 2060 he finally cracks, stabs his mother to death, bludgeons his father with a baseball bat, steals their savings and goes on a mission to exact revenge on everyone in his life that has ever slighted him.

Meanwhile, Lieutenant Eve Dallas of the NYPSD is relishing a few quiet days to catch up on paperwork and prepare for an invasion of relatives for the holidays. When the bodies of the Reinholds are discovered on Monday morning, her team soon identifies Jerald as the killer and follows his trail across the city. Jerald is living the high life, enjoying the money and freedom from parental nagging, but he is keen to get on with his new life and the bodies start to mount up. The police are always one step behind him and with an enormous list of potential victims, it seems impossible to predict who will be next and track him down.

This is an unusual murder mystery in that right from the start we know who the killer is, and when, how and why the crimes are committed. The story is entirely in the process of tracking him down and predicting his next move in order to get ahead of him and prevent further murders. Having said that, there is plenty of suspense as the team follows Jerald’s progress through the city. The violence is more immediate and personal than in Robb’s previous ‘In Death’ novels as we witness Jerald’s killing spree at close hand. As ever, Dallas’s husband Roarke is instrumental in solving the case, this time via his IT expertise and property ownership.

The writing is of Robb’s usual high standard. In Eve Dallas she has created a likeable, if flawed, central character. As the series progresses, more and more of Eve’s troubled childhood is revealed, as is Roarke’s shady past. This is the 37th book in the In Death series and thankfully it shows no sign of being the last.