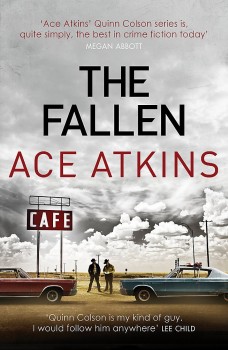 A robbery executed with military-style precision at the Jericho First National Bank gives Sheriff Quinn Colson some ideas about the background of those involved.

Quinn Colson is back as sheriff of Tibbehah County, dealing with matters ranging from minor domestic disputes to major felonies. His friend and mentor Lillie Virgil has resigned the position, fed up with the persistent misogyny of this very traditionally-minded county, and is thinking of moving on altogether. Quinn is going to need her skills, however, in dealing with a new menace.

A robbery in the central town of Jericho is only the latest of a series of bank jobs in Mississippi and adjoining states. The three perps use Donald Trump masks to disguise their identities, but the speed and efficiency they display suggest to Colson that they are ex-military. Chapters centred on the gang reveal that the men are former marines who enjoy the whiff of danger as much as the money.

Meanwhile, Colson’s sister Caddy is doing some detecting of her own, in company with Boom, Colson’s old ranger buddy. Caddy lost her way earlier in the series but straightened out and now runs a centre for the battered and the homeless. She is worried about two teenage girls who have gone missing. Caddy and Boom do some poking around and find the two worked for a time at Vienna’s, a bar and lap-dancing club out near the highway.

Vienna’s is run by Fannie Hathcock, an attractive woman and as tough as they come, assisted by The Born Losers, a biker gang with little to recommend them. The club’s services mean it’s a money-making machine, but Fannie has been getting pressure from Skinner, head of the local supervisors. He claims his efforts are in the service of morality, but Fannie knows that as with most things in the county, where there is money involved there is a good ole’ boy behind things with his hand out.

This series just gets better and better. Ace Atkins populates the county with some really great characters, and unusually for crime fiction set in US backwoods the women are drawn as well as the men. Lillie is excellent, a kind of Annie Oakley, and if she moves away as threatened I will be sorry to lose her. Fannie is another: we get some backstory that explains her combination of genuine feeling and preparedness to do what she has to do to survive.

The Trump bandits are too volatile to give them much of a future, and for all their armfuls of weaponry and lack of control, however, they are ultimately less frightening than the shadowy figures behind the scenes, the ones with the money who control the supervisors and the Klan and the John Birch Society. There is just a hint of their machinations towards the end of the book, and it is clear Quinn Colson is going to have more trouble.