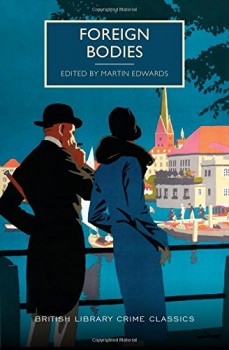 Sixteen short stories from round the globe written in the first half of the last century with a focus on crime and detectives in the classic tradition.

This British Library collection features vintage crime stories from Belgium, Denmark, France, Germany, Hungary, India, Japan, Mexico, the Netherlands and Russia. While enjoying popularity in their country of origin, many have never previously appeared in translation. The collection was assembled by Martin Edwards, who also gives an informative introduction.

Edwards traces the development of the detective story from Edgar Allen Poe onwards, although there are claims that elements of the crime genre can be found as far back as Herodotus. At any event, popular English writers such as Conan Doyle and Agatha Christie are known to have read foreign detective fiction, and this doubtless informed their work, just as those two authors influenced writers overseas.

The earliest of the stories was written in the 1880s (by Anton Chekhov, a name not normally associated with detective fiction) and the latest in 1960, so the collection shows a progression in modernity. However, the stories have much in common, frequently featuring a detective and companion, and in some cases laying out a puzzle, with clues by which the reader can find the solution.

It should be evident from the above that the Sherlock Holmes stories in particular stimulated overseas equivalents, but it is interesting to see how the prototype was adapted to suit foreign tastes. For one thing, the foreign detective is usually a policeman; in England the police have commonly been represented as bunglers, outthought by the gifted amateur.

Many of the stories have a touch of the macabre. Chief amongst these must surely be Saburo’s tale of Professor Tsujikawa’s cylindrical laboratory, packed full of poisonous spiders. There are two stories featuring ghastly revenge for past insults, and another pair, from India and France, featuring exotic poisons. However, it is the crimes solved by a keen eye and a bit of deduction which remain the most familiar and also the most satisfying.

Of the latter type I enjoyed Groller’s Inspector Dagobert in Strange Tracks and particularly Leblanc’s Footprints in the Snow. The Return of Lord Kingswood features Monk, not the OCD-driven character from TV but an urbane detective always ahead of the opposition.

Reading these tales brings home just how much has changed in the art of retailing crime for entertainment over the past century or so. It is difficult to imagine that any of the stories bear much relation to real life, but it is perhaps the juxtaposition of a stuffy and unexciting background with violence and skulduggery which gives them a variety of frisson often not found in modern crime writing.