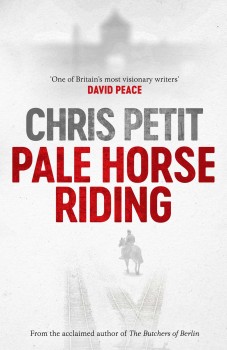 Police financial detective August Schlegel and his partner, the enigmatic SS officer Morgen, are assigned to investigate corruption at a Nazi death camp and are plunged into a hell of treachery, debauchery and murder.

Filmmaker Chris Petit tackles subjects few others would dare with brutal honesty, sparing the reader no detail, however disgusting. Two of his previous books have been set in World War Two. In this devastating and haunting follow-up to The Butchers Of Berlin he takes his readers into a Circle Of Hell that Dante could not even have imagined – the Nazi Konzentrationslager at Auschwitz-Birkenau.

Established in 1940 in the suburbs of the Polish town of Oswiecim, Auschwitz is still a symbol of terror, genocide, and the Holocaust. Almost 1,000 of 7,000 Schutzstaffel (SS) troops and civilians who staffed this factory of death were later convicted at war crimes trials and some, including the Nazi camp commandant Rudolf Höss – the Pale Rider of the title – were executed.

Jews were delivered to the camp’s gas chambers from all over German-occupied Europe and killed with the pesticide Zyklon B. An estimated 1.3 million were sent, of whom at least 1.1 million, 90 per cent Jewish, died. Those not gassed died of starvation, forced labour, disease, individual executions and horrific medical experiments.

To even set what is essentially a procedural in this indescribable hellhole is beyond noir. Readers who prefer their stories on the cosy side are advised not to even open this nightmare saga. For those brave enough, this byzantine, pessimistic narrative which explores societal disintegration and how individuals survive, both physically and mentally, will leave you wondering who, apart from the dead, are the victims, unless it is humanity itself.

By 1943 Auschwitz has become the biggest black market in Europe. The garrison, particularly a wealthy and powerful elite, has grown corrupt on goods confiscated from unsuspecting Jews – so much so that this activity is considered even more secret than the mass exterminations.

Police financial detective August Schlegel and SS officer Morgen, after dealing with the butchers of Berlin, are sent in disguised as postal officials to investigate gold, taken from the mouths of the dead, being stolen and sent through the mail. Their chances of surviving in this hotbed of greed, betrayal and brutality where all normal standards have been abandoned in a long orgy of drunkenness and sexuality are almost nil, unless they accept they must become as corrupt as those they are trying to expose – but if they do, what will it cost them? When a beautiful, if promiscuous, female member of the staff is found murdered, the investigations become entwined.

The sensitive and, despite the horrors of his last case, still naive Schegel, son of a wealthy English aristocrat married to a German businessman, is totally at a loss in this environment and struggles to keep his moral compass. He spends much of his time worrying about the fate of his unrequited love Sybil Todermann, a Jewish seamstress, who after escaping earlier mass round-ups now lives a precarious existence working for the camp commandant’s wife.

The near chain-smoking, hard-drinking Morgen often seems more upset by the deterioration in the standards of the SS as various undesirables from their Berlin adventure – all sentenced to death – turn up in various guises.

This is a lengthy story with a convoluted plot, too many names to keep track of and disturbing descriptions of calculated viciousness which at times makes discomfiting reading. The easy callousness is breathtaking, shocking and stomach-turning.

Petit writes with an assured ferocity and intelligence and the threads of his story are well constructed and managed, but many readers may find the entertainment quotient of the story diminished by the knowledge that much of the depravity he so vividly depicts actually happened.

This reminder of the true horrors and warped ideologies that wars can unleash is a brilliant, if distinctly uncomfortable, piece of work. After the Gotterdammerung of an ending, you may need to lie down in a darkened room and reflect on its message.