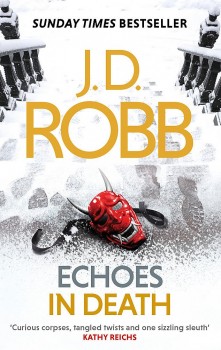 A chance encounter with a naked woman staggering through snowy streets leads Lieutenant Eve Dallas into an investigation of a series of cases where wealthy couples are targeted for brutal ritualistic assaults.

Daphne Strazza is found walking naked in the snow-covered streets of New York in the year 2061. She’s young and pretty and has been brutally assaulted. Luckily for her she is found by Lieutenant Eve Dallas, celebrated detective and her charismatic and exceptionally wealthy husband, Roarke. As Eve investigates the crime she discovers the brutal and sadistic nature of the sexual assault and the murder of Daphne’s husband.

Not only that, the crime is an escalation of previous similar assaults, all in the homes of wealthy couples where the wife is exceptionally beautiful. Eve realises that the serial attacker has now passed the point of murder and knows that in future assaults he will kill again – and he does.

This is the 44th book in the In Death series. It is the first one that I have read and now I need to read the other 43. Library, here I come! It is clear from the way that JD Robb writes that she expects the reader to have familiarity with the characters and that the way that they behave and their relationships have been shaped by the many plots that have gone before. Despite this being the case, it did not distract in any way from my enjoyment of the plot and my total engagement with the characters.

The main protagonists are very likeable. Eve is intelligent and interesting. She’s clearly a first-class detective and following her logical deductions is fascinating. She has a very troubled personal history and Robb uses this to bounce against the plot of this story, increasing interest and engagement. Eve’s home life with her super-rich, super-intelligent and super-handsome husband is enviable, both in terms of its material advantage but also in the total depiction of love and trust.

The fact that the novel is set in the near future adds an extra frisson of interest, with subtle language differences and reference to cultural norms, like transport and technology, stretching the imagination just enough. I really enjoyed this book. No wonder it is number 44 of a series.