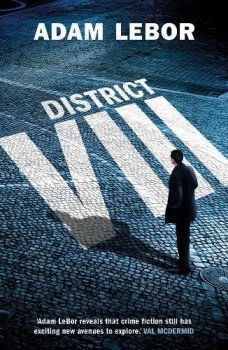 Romany cop Balthazar Kovacs receives a text showing a dead man, one of the hundreds of refugees crowded into Budapest hoping for a new life in the West.

In the late summer of 2015, Keleti railway station in Budapest is packed with those fleeing conflict in Syria, Afghanistan and Iraq. Those at the top of Hungary’s power structure have their own reasons for blocking onward progress of the refugees, whilst stirring up latent enmity against them, creating a febrile atmosphere with undercurrents of violence.

Against this background, murder squad detective Kovacs is sent a text of a man, evidently dead, and an address: 26, Republic Square, site of past atrocities during both the Nazi years and the Communist period. On arrival he is warned off by the Gendarmerie, a newly-created powerful and brutal force answerable only to the man at the top, Prime Minister Pal Palkovics.

Those at the top are in a permanent struggle for advantage, always ready to play a dirty trick on a co-conspirator if they see some benefit arising.

Kovacs is under-gunned in his attempt to investigate the murder, and the Gendamerie and their backers represent an existential threat. He has some cards to play, however. He has close family members who are involved with people smuggling, and his off-and-on girlfriend Eniko is a journalist with a reputation and contacts. Both the police and local and foreign secret service agencies have concerns about the situation and are willing to help.

This is an excellent thriller, entwined with plenty of topical issues. Visitors to Budapest can see the money being spent parts of the centre favoured by tourists, and the remarks made about the diversion of EU largesse into private hands is thought-provoking. As in Russia, the fall of communism has not ended the centralisation of political and economic power, and society remains vulnerable to manipulation by the self-interested.

The flood of refugees from the Middle East is of course a big news issue, and one over which there is a great divergence in views; Lebor suggests that Hungary’s compassion is limited, even though some individuals try to help. Kovacs, being a Romany, is no stranger to discrimination himself and is thus understandably sympathetic.

In fact, Kovacs is a terrific character, a man who appreciates his community but risks ostracism by refusing to live as his father and some other members of his community demand. As with Romano Gry, Martin Cruz Smith’s gypsy protagonist, Kovacs gives the reader insights into an alien culture that is by and large reviled, and adds an exotic note to a gripping tale.