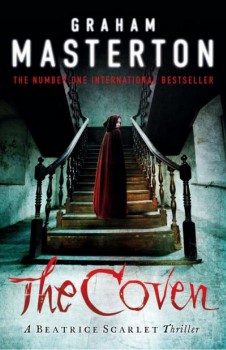 Widowed Beatrice Scarlet loses her son to Red Indian raiders and returns to England to help at a home for ‘fallen girls’, but finds there are as many savages in 18th century London as in the wilds of colonial America.

Master of horror Graham Masterton uses what can only be called a Georgian snuff club as the setting for the second adventure of apothecary’s daughter, the widowed Beatrice Scarlet in another outstandingly suspenseful and intricately plotted thriller.

With her preacher husband murdered and her young son kidnapped by marauding Indians, Beatrice must leave the New Hampshire manse which has been her home and return to England. The church finds her a post at St Mary Magdalene’s Refuge for ‘fallen women’. She enjoys the work and soon forms a close bond with her charges.

The refuge is supported by a wealthy tobacco merchant, who regularly offers girls from the home work to aid their rehabilitation. But when seven sent to his factory all disappear, Beatrice is uneasy. And when their self-proclaimed benefactor claims they were a coven of witches, she suspects that something much darker than witchcraft is at play.

Masterton highlights the conflict between superstition and science which underpinned almost everything in the London of 1758 and combines it with a graphic tale with a large element of horror. Beatrice is very much a heroine of her own time, charismatic and courageous, clever and compassionate, who could offer lessons in independence to most modern women.

The Coven is a cleverly crafted story with some compelling depictions of conditions on both sides of the Atlantic in the middle of the 18th century and does not hold back on the hardships, brutality and dangers, using often brutally stark descriptive language.

But it has its faults. The opening chapters are slow, largely a recap of Beatrice’s backstory. When her son goes missing, presumed kidnapped by Indians, she is naturally worried and upset. She’s told she must vacate her dead husband’s house, which she accepts almost tamely, apparently accepting this situation on some friendly advice and a tarot reading! There’s also what seems a dragged out scenario involving a suitor, solely designed it seems, to prove he is unsuitable and also to cut Beatrice and her daughter from their American ties.

The story picks up pace and interest once they arrive at St Mary’s with its cast of characters with interesting back-stories. The mystery of the missing girls seems glaringly obvious, designed to focus on the business of finding proof rather than identifying the guilty.
Some of the historical setting may leave the reader wondering too. In the mid-18th century few, if any, decent women would travel around London alone, or meet a young man in the evening unchaperoned.

No Masterton story is without its horror and there are some brutal and explicit rape scenes. While some of this may be a bit over the top for some readers, it does make his point of Georgian society’s appalling inequality, hypocrisy and division. And his use of language, particularly the street slang of the period, along with some superb descriptive passages, brings the story to an often unpleasant life.

This follow-up to The Scarlet Widow is by no means Masterton’s best. The subject matter isn’t that nice, too many of the characters are either cardboard or caricatures and the plot is hardly a brainteaser. But for all that, he retains his ability to chill at will.