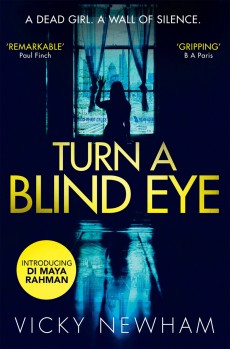 DI Maya Rahman investigates the murder of the head teacher at her old school amidst cultural tensions in London’s East End.

DI Maya Rahman is on compassionate leave following the suicide of her brother in Bangladesh, but when she gets a call from a local reporter asking for information about a suspicious death at Mile End High School, Maya gets straight back to work. Mile End High is her old school, and brings back a lot of history for her.

The dead woman is Linda Gibson, the head teacher. She’s been strangled. At first it appears to be an isolated murder, but Maya isn’t convinced and the presence at the scene of a piece of white card with some strange, ancient-looking writing on puzzles her. Her boss, DCI Briscall, wants results and he wants them fast. And with the press nosing around, the pressure quickly mounts on Maya.

Vicky Newham’s accomplished debut handles a large and diverse cast with admirable ease. DI Maya Rahman is a breath of fresh air in a genre still disappointingly weighed down with white, middle-aged maverick coppers called Jack who drink too much, have relationship problems and are generally obnoxious. I took to her from the start and enjoyed the gradual reveals that never overload with backstory, provide enough to pique interest, but never swamp with info dumps.

Newham excels at show, not tell. Maya gets on well with her elder sister but has trouble dealing with her elderly mother’s neediness since the disappearance of their father when Maya was only a child. He went out one day and simply never came back. Maya’s mother’s decline started then and was never reversed, and now she is in a care home suffering from the insidious creep of dementia.

Maya’s sidekick is DS Dan Maguire, a fast track entrant to the force from Australia. Dan is missing his wife and kids but hopes they’ll join him soon, although it looks like he might be waiting a while yet. They make a good team. Both are bright, likeable and work well together. Mile End High is, on the surface at least, a once-failing school pulled back from the brink by Linda Gibson, but someone wanted her dead. Maya and Dan keep coming up against mentions of a recent suicide of a teenage girl at the school that – on the face of it – has nothing to do with the head teacher’s death, but the more Maya digs, the more she finds cultural tensions at the school, and a suggestion that the staff had ignored an attempt to force the dead girl into an unwelcome marriage.

Newham deftly handles the inevitable clashes of both race and culture and isn’t afraid to shine a spotlight on the problem of forced marriages. The book is set in East London, an area Newham knows well from having taught in Tower Hamlets. The sense of place positively oozes from the pages and I felt like I was walking the streets with DI Maya Rahman as my guide. On a couple of occasions I wondered if the book was about to take a nose-dive into the serial killer sub-genre, but even when the bodies do start to mount up, Turn a Blind Eye still manages to stand out from the crowd.

When Newham is working in Maya’s point of view, the story is told in the first person, interspersed with chapters from Dan Maguire’s point of view and that of Steve, a new teacher at Mile End High who had the misfortune to find the head teacher’s body. Each of them bring a fresh perspective to the party and push the story along at a decent pace that never gets bogged down.

This is a quality police procedural with a standout main character and a great supporting cast.