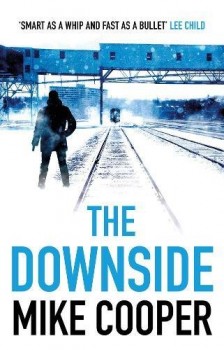 When the theft of valuable metal ore ends in arrest for Finn and his gang, he smells a rat. A new heist offers opportunities, and the chance to find the man responsible.

Seven years ago, Finn and three other men – Jake, Corman and Asher – were in New Mexico robbing a train of several tons of molybdenite ore when the police arrived. All four spent time in jail, and Finn is the last to be released. His suspicions that someone on the team betrayed them focus on Wes, the man who conceived the theft, although he doesn’t understand why, and since Wes wasn’t privy to the details, how he would have known to direct the police so accurately.

Finn is met on his release by Emily, who has been sent by Wes to line him up with a new job, involving entry to a state-of-the-art vault in Newark, New York, holding millions of dollars worth of precious metals, rhodium in particular.  Initially Finn is reluctant, but with no resources decides to take the offer. An additional inducement is that it will bring together the same people, and Finn is confident that this time he can expose the rat.

Finn adds Nicola to the team, a computer whizz who can confound the vault’s specialist security features, and the rest of the team are competent to wrangle the earth-boring and other major items of machinery involved. The vault is enclosed in a railway yard, and entry is set for a holiday when there will be little going on apart from the movement of a major item by rail, which it is hoped will create a distraction. Things do not run smoothly, however.

Wes is temporarily short of the funds needed to front the project, so Finn and his friends have to be somewhat creative. Emily and Nicola also find a good use for their climbing skills. This, the dangerous machinery in use and the risk of discovery all help to ramp up the tension.

The book has all the ingredients of a great heist story. The potential rewards are astronomical, the means of securing them calling for an impressive range of technical equipment, and the risk of exposure by someone in Finn’s close circle an ever-present danger. The author has had to master sufficient knowledge in such diverse fields as computer hacking, speculation in the commodities markets, tunnel boring and high-voltage power tapping, and manages to do this convincingly.

The final stages of the reveal make for great excitement and even elements of the story that the reader can see coming do not disappoint. This is great fun, although I do wonder how one would go about disposing of several million dollars worth of rhodium. Answers on a postcard, please.