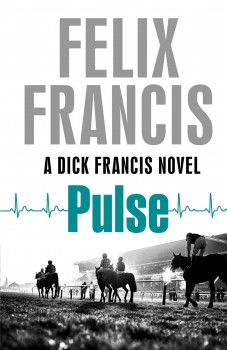 Dr Chris Rankin is used to having patients die on her but none have been as shrouded in mystery as the man brought in unconscious after a day at Cheltenham races. Despite warnings, she isn’t prepared to leave well alone.

Dr Chris Rankin works in the Accident and Emergency Unit at Cheltenham General Hospital. She loves her job and is good at it, but it’s becoming harder and harder for her to hold everything together, and when she feels a panic attack coming on, she needs to retire to a cupboard to regain control. This hasn’t gone unnoticed by her colleagues, who are becoming concerned about her fitness to work.

Matters come to a head for Chris when a mystery man is admitted and subsequently dies, despite the best efforts of Chris and her team to save him. There are no clues to the man’s identity. All the police know is that he was found unconscious in a toilet at the end of a day’s racing. His heart had a massively erratic rhythm and Chris’ attempts at stabilising that met with little success. The man died when she was attending to another emergency admission.

When a colleague questions her professional judgement during her attempt to save the man, Chris’ bosses are quick to suspend her, pending investigation of her actions, but they also use concerns about her mental health as a stick to beat her with. Chris is unable to simply sit and do nothing, and attempts to satisfy her curiosity about the mystery man and the circumstances of his death. The hornet’s nest she stirs up in her investigation puts her life at risk and doesn’t go down well with anyone.

I’ve been an avid reader of horseracing thrillers, ever since I discovered my first Dick Francis book in about 1982, not long after the publication of Twice Shy, lent to me by a friend who was very into computers. He assured me I’d like it, despite my protestations of knowing nothing about horseracing. He was right. I liked it a lot, and devoured Francis’ back catalogue as quickly as I could get my hands on them. I stuck with them during his collaboration with his son Felix and then carried on with his son’s solo offerings. But it’s become duty rather than pleasure, driven by the same need for order and completeness that obsesses Felix Francis’ latest protagonist.

Dr Chris Rankin has more than her fair share of mental health issues: depression, a large slice of Obsessive Compulsive Disorder and a side order of anorexia. Not that Chris will eat anything served up to her; in fact she’d rather not eat at all, thank you very much. The attempt to conceal the fact that she’s female by use of a name that could apply equally well to a man of a woman didn’t last very long, but I was left with the impression that I was meant to be surprised by the reveal, and to think this was a brave departure, writing from the perspective of a woman for the first time.

That feeling that I was meant to be impressed by the writing and the research persisted through the book, even when I was anything but impressed.

Dick Francis’ books always wore their copious research lightly. His wife Mary even learned to fly a plane on one occasion to add authenticity, but facts never felt shoe-horned in. By contrast, his son’s delivery of his latest research hops heavily from one mini info dump to the next, reading like a series of Wikipedia entries carelessly dumped into each paragraph. He even feels the need to explain what A&E stands for to lead into a joke that should have been pensioned off when Charlie Fairhead was a lad.

The writing is pedestrian and at times corny in the extreme. If anyone had been present with a camera, I would have promptly won a place on the Olympic Eye-Rolling team when a phrase all too close to ‘Little did I know…’ was trotted out at the end of a chapter, in yet another piece of all too obvious foreshadowing.

The characters are as leaden as the prose, and I found the Wiki-style explanations of Chris Rankin’s various problems to be lacking both in empathy and any real understanding of mental health difficulties. If it wasn’t for my own completeist tendencies, I certainly wouldn’t read another book by Felix Francis. There’s a sort of train-wreck fascination attached to them now, but I really wish I could invest in a pair of blinkers and just gallop by at speed.