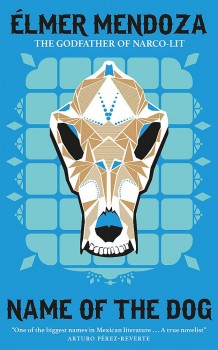 Name of the Dog

Detective ‘Lefty’ Mendieta is trying to get to grips with a chain of murders of dentists when the death of someone close to a drug boss triggers a war.

This is the third outing for Edgar ‘Lefty’ Mendieta, a detective working in the Mexican city of Culiacan, the Sinaloa State capital. Traditionally Culiacan has been an agricultural centre, but its economy is now dominated by narcotics. Shootings and deaths are commonplace, and the President’s declaration of a war on drugs is unlikely to change the reality anytime soon.

Mendieta begins the book rather happier than usual. An old flame, Susana, has returned looking as beautiful as ever, and willing to take up where they left off 18 years ago. And she has in tow a son about whom Lefty knew nothing, the image of the handsome Mendieta and keen to make detective like his dad.

As far as work is concerned, someone is apparently targeting dentists, killing them with a large-calibre pistol. While readers are made aware that the deaths are down to a gang boss maddened by a painful abscess, Mendieta’s team focus on the two lovers of a dentist’s wife. One is a kick-boxing champion and has connections, which defeats police attempts to interrogate him for a while.

Behind the scenes, however, significant political machinations are underway. In the service of the President’s public declaration of war on the ‘narcos’, undercover intelligence agent Ugarte is charged to infiltrate a meeting of leaders of the Pacific Cartel. The cartel is led by Samantha Valdes, a woman who is inclined to reduce the levels of violence; but after the execution of someone close to her she lashes out in anger, with dozens being killed every day. To help find the killer responsible, she calls in Mendieta, who knows that getting to the truth is the only way of halting the chain of deaths.

Mendoza maintains a pretty fast flow of action, interrupted only for meals, which the principals take seriously, with mouth-watering descriptions of local dishes. The plot moves along in a rather jerky fashion which I think helps to sustain excitement, although as you become adjusted, minor plot defects are less easy to overlook. There is a major reveal at the late stages that is pretty plainly advertised, even if events are inherently improbable.

As with earlier books in the series, readers have to overcome a lack of punctuation marks for speech and over-lengthy paragraphs, things that combined with the occasional unfamiliar word or turn of phrase can make re-reading a necessity. A large cast of exotic names can also confuse, although a list is provided. The speech is vulgar in the extreme, but part of a robust colloquial dialogue which feels authentic. There is plenty of humour, all the more striking when set against a background of fear and violence.