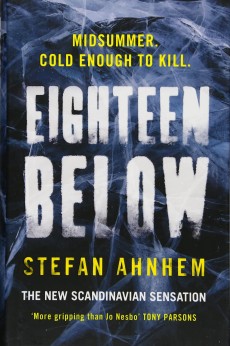 It looked like suicide when the car drove into the water. But now the troubled Helsingborg crime squad know it is murder.

Astrid Tuvesson, chief of the Helsingborg Crime squad, has a problem. Alcohol. Maybe she shouldn’t chase the idiot who just slammed into her wing mirror. But she does. And even though she rolls her car, she witnesses the man she is trailing drive straight off the quay and into the water.

Fabian Risk, one of Astrid’s squad, has more than one problem. He is growing increasingly distant from his artist wife, his teenage son is still recovering from the trauma of two years before, and his daughter is at that age. And Fabian has problems at work too, mainly Astrid’s frequent alcohol-induced absenteeism.

Fabian’s problems are about to get worse. The suicide Astrid witnessed looks like murder. The man’s body had been frozen for two months. Yet Fabian can’t trust Astrid to show up to work let alone take control of what is about to be the most complex and horrific crime Helsingborg has seen in years – a  crime that will reach into the heart of his family.

I peeked at the number of pages in this book because of its sheer size. At over 500 pages and not in large print, I thought it might even slow me down. But as I read the prologue, the author teased me in and I hardly came up for air.

Eighteen Below is not without its weak points. There is a huge amount of unnecessary and disruptive backstory, enough that if the plot hadn’t hooked me, I would have thrown the book down in despair. I also thought the relationship between the plot and subplot was flimsy. While they both made for great stories, even at the end their reason for being in the same book was almost obscure, unless this is the beginning of a series (yes please!)

At first, I found the stroppy, negative introspections of the characters overdone. It was as if every time I met a new player, they had swallowed a handful of hate pills. With hindsight, it did help those characters come to life, even though it irked me at the time.

It took a while for the protagonist to stand out from the pack of major characters. It seems fashionable to keep the reader waiting for an introduction to the hero or heroine, and this book is no exception. Each chapter, written in the closed third person, past tense focusses on one person. Ignoring the prologue, where there are no names, the first chapter is Astrid’s point of view, the second is Theodor’s, the third is devoted to the pathologist, and we only really meet Fabian in the fourth chapter. I am uncertain if this a fashion that improves story-telling or if it is something readers even appreciate.

I like Fabian and Dunja (protagonist of the subplot). They are flawed, human, and their behaviour is consistent with their introspections. I couldn’t raise any enthusiasm for Astrid or Fabian’s wife; they seemed to have few redeeming features. The author portrayed Fabian’s children as believable teenagers, if occasionally slightly over the top in their actions. I didn’t quite understand the relevance of Fabian’s daughter raising spirits with a Ouija board in a police procedural. The supernatural addition to the story is incongruous and, as much as I love a supernatural story, it wounded my suspension of disbelief.

The chapters are short, which moves the story forward at a cracking pace, and leaves the reader clamouring for more. However, the author often goes out of chronology within the chapters, which, until you become acclimatised to his style, does give the flow a hiccough.

The occasional clumsy clues spoil the main plot, and for the experienced sleuth, it won’t take long to work out the main killer’s identity. But the subplot keeps the reader wondering when and how the two stories would merge. Perhaps that is why I found the ending slightly disappointing, despite a couple of sharp twists. I can only hope that that, along with the loose ends, is because this is just the first time we come across Fabian and Dunja.