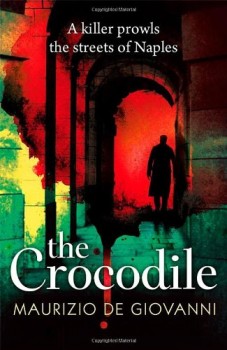 Inspector Lojacono becomes drawn in to a series of shootings where the motive remains elusive and the media put the police under pressure.

Inspector Giuseppi Lojacono was on a fast career track in Sicily when named to his bosses as an informant by a Mafia grass. Despite the absence of evidence, Lojacono’s wife and daughter have been sent to the other side of the island for safety and he is posted to Naples, where he is considered suspect and spends his time playing computer poker.

However, when a young Neapolitan is murdered, Lojacono happens to be on duty and becomes involved. Further deaths follow, the culprit leaving tissues at each scene and is dubbed ‘the crocodile’ by the media.  Lojacoco’s view that the deaths are not Mafia-related puts him at odds with his boss, but luckily the Assistant Public Prosecutor agrees with his thinking, and an investigation of past events linking those most affected by the deaths provides vital clues to solving the mystery.

The Crocodile introduces us to the killer from the beginning, so this book is not so much a ‘whodunnit’ as a ‘whydunnit’. The methodical preparations for his next hit are detailed and hints given as to motivation. We are also given a glimpse into the lives of the victims immediately before each meets his or her fate, which gives each death some weight. These chapters interleaf with those focussing on Lojacono, the change in perspective helping to build atmosphere and tension. Nothing about this structure is new, but the pacing is well judged and the book builds to a satisfactory climax.

Many of the crime books set in Italy make a feature of the local surroundings; not so in The Crocodile, in which the picture presented of Naples is less than prepossessing, and understandably we hear little about the city itself. The action could be set in any European city, but there are a few touches which convey an authentic Italian flavour. The interplay between Lojacono and a police sergeant, also sidelined for a misdemeanour, adds a note of humour somewhat reminiscent of that found in the offices of other fictional Italian police.

Lojacono as a detective is less dysfunctional than some of his peers, his only problem being the shadow cast over his life by the Mafia informant, which has resulted in the break-up of his family as well as his career hiatus. No doubt the suspicions about him will continue in future planned outings, allowing plenty of prejudice to be overcome by the protagonist. Luckily, he is irresistible to women, including the dynamite cook at his local restaurant and the shapely Assistant Public Prosecutor already referred to, Dottoressa Piras. His awareness of detail and ability to think clearly single him out from the remainder of the Naples police, who don’t emerge from the book very well.

Overall this is a very readable book, reasonably credible, and a marked step up from the lamentable efforts of some of De Giovanni’s compatriots, if not particularly ground-breaking.