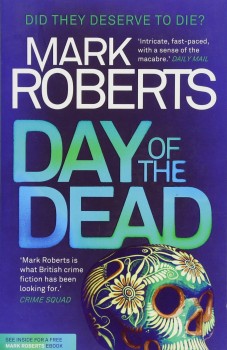 Day of the Dead

DCI Eve Clay is on the hunt for a serial killer – the killer that most of the country reveres.

As a mother, Eve Clay would be celebrating the death of not one, but two paedophiles. But she is a DCI in the Merseyside police force, and the lead officer in the hunt for the killer. The murders have most of the hallmarks of Vindinci, the celebrated serial killer who was convicted for the savage murders of several paedophiles in the south of the country. The same Vindinci who most people admire for cleansing their country of the despicable perverts. The same Vindinci who escaped from prison the year before.

But there are differences in the modus operandi. And Eve is convinced her team is on the hunt for a copycat. Even more so when they receive a current photo of Vindinci at a parade in Mexico, 5,000 miles from Liverpool.

Eve and her team have leads, but the killer is always one heart-beat ahead. It forces Eve to suspect the unthinkable – that there is a leak in her tight-knit team.

This is the third in the Eve Clay thriller series. Written in the past tense, third person omniscient point of view, there is a degree of detachment from the characters and events, but perhaps I am being unfair as I haven’t read the first two in the series. Perhaps I would have got to know the main characters better if I had. I found it difficult to connect with the characters, even though some of them had twists to their stories.

Eve Clay has a healthy family life, which is refreshing as far too many fictional detectives have a poisoned personal existence. However, her backstory more than makes up for a lack of problems at home. Brought up in care, almost raped as a little girl, she falls comfortably into the group of detectives-with-baggage, so still feels rather stereotyped. I hope for the suspension of disbelief that her baggage has been touched on in the earlier books, because the author is following the tacit series-writing formula of dedicating one of the series to a crime that is personal to the protagonist. However, there is a hint of convenience that runs through the plot, which is strengthened by Eve’s backstory.

The chapters are headed with times, often only minutes apart, which should give this book a fast-paced feel. Unfortunately, the writing style is long-winded, and lets this element down. Swathes of flabby dialogue, repetitions, and lengthy sentences filled with adjectives and adverbs cry out for editing. So, while the plot is reasonable, I found myself distracted, sometimes bored, by the irrelevant minutiae. The description in the scenes of violence is often gratuitous, and I ended up skipping paragraphs.

The dialogue lets the story down. From the first pages, where the reader hears an eight-year old child speaking, the word-choice is unrealistic. While I agree that children in care are often more street-wise, quite simply, I could not believe a child would think, let alone speak as she does. It didn’t bode well, and the ensuing dialogues did not allay my concerns. At best, one could describe the voices as generic, with only grating repetitions of a couple of key words to make certain characters distinctive. Worse still, the dialogue crosses into the forbidden realm of being pedestrian and sloppily true to life. Dialogue does not push the story forward sufficiently in Day of the Dead.

Although the author clearly has an intimate knowledge of Liverpool, this come over in terms of his knowledge of geography, not in terms of atmosphere. So, for someone who doesn’t know Liverpool, the setting could have been any town or city. I want to come away with a sense of the place, the mood, the character, the good, bad or ugly areas.

The plot has twists, one which can only be described as obvious, naïve and with far too many clues. The others feel contrived, to make the characters stand out. I was disappointed with Day of the Dead, because with some tightening up, this could have been an interesting, fast-paced police procedural.