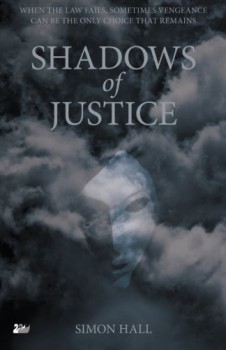 TV reporter Dan helps the police in their search for a kidnap victim and, following an unsuccessful prosecution, perpetrators of vigilante justice.

Chief Inspector Adam Breen finds it helpful to have TV reporter Dan Groves at his side, and calls him in at the inception of all his investigations. Breen’s seniors are not happy, but prepared to live with it as long as he maintains his high success rate. Readers will have to overcome their scepticism as to whether such an arrangement would be acceptable or workable even if, as in this book, the reporter has all the best ideas.

In Shadows of Justice, Dan is called in when the daughter of a local retail magnate is kidnapped. Thanks to Dan’s assistance, the victim is freed. A prosecution is brought, but the jury find insufficient evidence to convict. When vigilante justice is taken on those exonerated in court, Adam and Dan believe they have four suspects.

One, the father of the kidnap victim, has a strong motive, but the others: the judge, the usher and the foreman of the jury at the trial, are identified merely because they expressed reservations as to whether the trial result truly represented justice. Attempts are then made to home in on the guilty party by such methods as observing reactions to a TV report showing that the vigilante justice resulted in harm to an unrelated girl.

It would be best to say no more about the plot, in the hope that the book has more to offer by way of characterisation. Unfortunately there is also disappointment in that department. The story is told primarily from Dan’s point of view. We hear he has a long-term relationship with Adam’s subordinate, Claire, but for reasons unclear they are estranged and he has a brief encounter with Katrina, a Scotland Yard kidnap expert brought in for the case. He is close to his dog, but the thoughts he shares with him while out walking are not revealing.  As for the other characters, we never hear enough from them or about them sufficient to give them a more than minimal substantiality.

For ‘a BBC Television news correspondent who specialises in crime’, one could expect rather more from Simon Hall than a frankly risible representation of police procedure. His background is more evident in his appreciation for Dan’s expertise in preparation of pieces to camera with a few minutes' notice; doubtless this calls for skill and practice. But when it comes to asking those touched by death or disaster ‘how they feel’ for the cameras he possibly doesn’t realise the distaste often felt for the questioner. While it may be difficult to look away, the professional exploitation of those under great stress for the vicarious satisfaction of others is never a pretty sight, and a no better read.