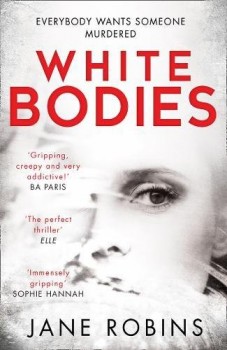 Callie’s sister needs saving from her toxic husband. And there is only one way …

Tilda is the beautiful and successful twin. She shines where Callie rests in the shadows. She pushes where Callie holds back. Tilda would; she is a film star. And Callie is just that chubby girl who works in a London book shop. But they are close in their way, until Felix steps into Tilda’s life.

At first, Felix’s charisma mesmerises Callie. She is as enthralled as her sister. But the gradual changes in Tilda worry Callie; little signs that her sister may be in a toxic, abusive relationship. Desperate to help, Callie contacts a forum for abused women, and the more she learns, the more her fears take shape.

And then Callie finds out that Tilda has married Felix. And the game of cat and mouse has just become one of life and death.

I am not one to judge a book by its cover, but the title of this book, White Bodies, did not draw me in at all. After devouring the story, I still don’t like it. Moreover, it doesn’t relate to the contents in any significant way. That said, it is almost the only thing I don’t like about this first journey into fiction by Jane Robins.

The book is written in the first person present tense, from Callie’s point of view, with an angsty breathlessness to the narrator’s voice; one which is vibrant, disturbing and utterly believable. From the outset, I sensed an obsessive protagonist, but one who is slightly frail and definitely likeable. Then there’s a leap back in time to the twins’ childhood and the knowledge that Callie the underdog has a stomach-turning addiction. I must admit, it is an image that repulsed me, and one I am still trying to shake out of my head. But it worked its magic; Callie became more than a preoccupied observer who keeps a diary about her sister, she became a suspicious, perhaps unreliable person.

Tilda is, while far from stereotyped, a flighty, narcissistic actress, and one who I was exasperated by but wanted to hug by turns. She has all the signs of an abused wife but loves Felix’s attention. She shuns her sister’s help yet can’t stop herself from letting Callie know about the depravity underpinning her marriage.

Felix, despite being on stage for a fair amount of time, is less developed. However, his behaviour is suspicious and convincing as an abuser. The other characters, particularly Callie’s boss, are a little typecast, until they are not!

Although the backdrop is London, the author shines more in her description of the immediate milieus and creates atmosphere with brief sketches. Callie’s dangerous and disturbing internet conversations and relationships brings the story right up to date.

The plot is sharp, sly and twisted, and raises many questions about who we can really trust. Although things fall into place before the final act, the author keeps a degree of suspense coming. I found the ending a bit hurried and happy-ever-after, but it doesn’t particularly detract from a delightfully nasty story that got under my skin. The author has found a unique voice and used it to create a fast-paced, easy-to-read novel. Now all I need to do is get a rather stomach-churning vision out of my head.