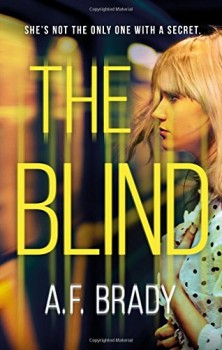 Sam James was warned about how dangerous and unhinged her latest patient is. But to Sam, Richard seems perfectly sane.

Psychologist Sam James has two personas. The façade she presents at work is of a confident and competent woman who takes on the worst cases; the ones with which none of her colleagues at the Manhattan psychiatric institute wants to dirty their hands. Out of work, she is a mess. She drinks, to excess. She languishes in a violent, toxic relationship. She is attracted to another man.

Richard, Sam’s latest patient, has no visible persona. He has almost no case-notes other than a reference to him having been in prison. He is silent, unbending. Sam’s colleagues have built his character on rumours, and predictably dumped him on her desk. But as Sam chips away at his wall, she sees a different person from the picture her associates have drawn; she uncovers a man who is quite normal. Perhaps more normal than her.

Although this book is intimate and immediate as it is written in the first person present tense, the protagonist is not someone with whom I found it easy to connect. Sam is an ugly character, wallowing in self-pity. She is an alcoholic; an increasingly familiar and fashionable main character in psychological thrillers. But she is even less likeable than most. She doesn’t wash. She is still drunk when she goes to work, sometimes to the point of vomiting in her waste basket. Her behaviour swings between inappropriate and childish and is inconsistent.

However, the real problem with Sam is her voice. It is incongruous. She is a qualified psychologist with years of experience under her belt, yet her overly simplistic narrative is adolescent. It pulled me out of the story at regular intervals.

Richard is present from early on, but he doesn’t come to life until much later. I preferred him to Sam, but I am still questioning how nowadays, someone can arrive at a psychiatric institution as a complete unknown quantity, with absolutely no background information. However, the aspect that broke my suspension of disbelief more than that is that nobody noticed Sam’s repeated unprofessional behaviour, let alone her acts of outright professional misconduct. I am surprised she even managed to keep her job.

The story is unashamedly dark. It deals with mental disorders, drug addiction, abuse, sex. It touches on suicide. In that respect, it demands a strong stomach. However, it doesn’t read like a psychological thriller. The pacing is too slow, although it does pick up towards the end. The ending is obvious from the first few pages because of clumsy foreshadowing, and so the twist falls flat. I didn’t feel danger creeping up on Sam in that psychological thriller way; she is more a danger to her patients than anything else.

This is a story about a woman psychologist coming to terms with her own issues. The author clearly knows psychology, the failing health system and Manhattan. And for a debut novel, she has found a balanced way of telling what she knows without turning it into a sermon. She has portrayed Sam beautifully as having the double personality with which so many people suffer, particularly health professionals. Unfortunately, Sam lacks and desperately needs a redeeming feature to make her more likeable.