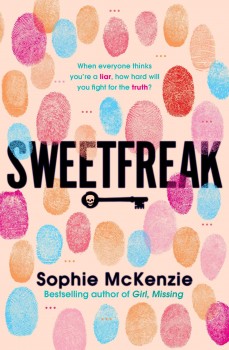 Carey’s best friend is receiving nasty messages from someone calling themselves SweetFreak. When Carey is accused of being the perpetrator, she’s determined to prove her innocence, but the evidence is against her.

Carey and Amelia are best friends.  There are times when Carey thinks her friend is a bit of a drama queen, but even so, she’s still willing to brave her mother’s wrath by sneaking out at night to meet Amelia when she starts getting agitated texts from her friend. Carey’s not too pleased when Amelia doesn’t show up, and she’s even less happy when she becomes the focus of a police investigation into some vicious online bullying directed at her friend.

Apart from Carey’s mother, everyone seems to believe that Carey is responsible for the nasty, threatening messages the person who styles themselves SweetFreak has been sending to Amelia. When the police prove that the messages were sent from Carey’s laptop, even Carey’s mother’s belief in her innocence crumbles in the face of the evidence.

For Carey, there’s only one thing she can do, and that’s prove her innocence by discovering SweetFreak’s true identity, but that doesn’t prove to be easy. Every time Carey thinks she’s got a line on the real bully, her sliver of hope is abruptly snatched away. Carey is isolated and friendless. Only her older sister now seems to believe her, which is some consolation, but it’s not enough to make up for the loss of her best friend.

SweetFreak shines a penetrating spotlight on the unpleasant world of cyber-bullying and shows how someone’s life can so easily be made a misery when trolling gets out of hand. This clever YA story examines the nature of trust and shows how easy it is for things to be blown out of proportion in the hothouse of intense teenage friendships that can just as quickly turn best friends into sworn enemies.

The relationship between Carey and her sister Poppy is well-drawn, although there were times when I struggled to work out the age difference between the two, with Poppy probably only a couple of years at most older than Carey. The family background, with an absent father and a harassed mother trying to do her best by three children on her own, is convincing and there are no easy solutions to their problems.

The complex web of resentment that surrounds Carey is a difficult one to get a handle on, and as a consequence, guessing the identity of SweetFreak isn’t easy, although Sophie McKenzie does play fair by her readers and all the clues are there if you know where to look.