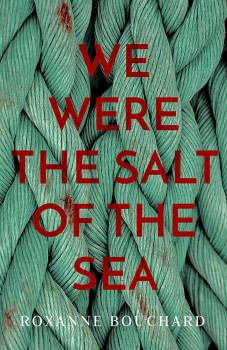 We Were the Salt of the Sea

Detective Sergeant Joaquin Morales, relocating from Montreal to a seaside village, is assigned the death of a local woman who sailed home after years away.

DS Joaquin Morales is attempting to reinvigorate his life with a move away from the city to a village on the Gaspe Peninsula. His wife is expected to follow quickly, but over the next few days it emerges that she has other priorities. Morales is discomfited, and his confusion is compounded when on arrival he is immediately pitched into a major investigation, the death of a local woman.

Marie Garant, the victim, was a character of legend in the village, a beauty but wild, who took off in a sailboat many years ago for dubious but rewarding activities in far waters, returning home infrequently. Her body was found in a fisherman’s net and her sailboat found in a sheltered spot a few miles away, from which she had evidently fallen or been pushed.

Morales initially makes little progress with the case. As a young woman Marie had been involved in a series of affairs and tragedies in the village, and most residents hold strong feelings about her, for or against. Few are willing to share the facts with Morales, although more than willing to sneer at him as a metropolitan intruder who will never understand local ways.

Another complication is Catherine Day, another beautiful woman, who somewhat mysteriously arrived just before Marie’s body is discovered. The book proper begins with a sight of the village through Catherine’s eyes, told in the first person, and her chapters alternate with those following Morales. The two parts have a distinct difference in flavour, Morales’ being practical and Catherine’s having a more dreamy quality.

Morales eventually gets a grip and begins to unravel the stories of the past which give a clue to the motive behind what was in truth a homicide. In the continued absence of his wife he makes a play for Catherine, although his lack of success is a matter for more teasing from the villagers.

The constraints of village social life are well brought to life, exemplified by the verbal tics of local characters: Renaud at the Bistro who punctuates his speech with ‘let me tell you...’, Cyrille who starts each sentence with ‘Heee...’ and fisherman Vital, whose every other line is ‘Christ in a chalice..’. I am unsure whether these mannerisms would be more amusing in the original French; in translation they did come across as clunky, and fairly irritating.

Otherwise there is much to like. The difference in the more poetical perspective voiced by Catherine, and the chapters with a focus on the coldly analytical Morales is excellent and makes for an interesting change of pace. The background of the sea and sailing will appeal to those who enjoy life on the briny, and Morales’ determination to get a result in difficult circumstances shows him to be a character worth following.