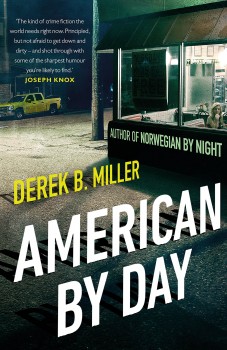 by Derek B. Miller

The action in this book immediately follows that of the excellent Norwegian by Night, in which Sigrid Odegard helps to rescue a young immigrant boy. That case ended with a questionable shooting, and Sigrid decides to take time off to ponder whether she could have acted differently. On her arrival at the family farm, however, her widower father Morten insists she travel to the US to help her troubled brother Marcus, with whom he has lost touch.

Sigrid arrives in Watertown, New York, and makes contact with the police, in the form of local Sheriff Irving Wylie. Irv tells Sigrid that Marcus’s girlfriend Dr Lydia Jones recently died after a fall from an unfinished building. Marcus was present at the death, was overheard acknowledging responsibility and has since gone missing.

Lydia’s death came a few weeks after the shooting of Jeffrey, a black child in a neighbouring county, by a white police officer, who subsequently escaped penalty. Lydia, who was the boy’s aunt, was crushed by these events. If her death was murder, Irv’s bosses want to see a culprit standing trial to relieve political pressure. A finding of suicide would be torment for Lydia’s family and the black community generally.

Either way, Marcus has questions to answer. Sigrid appears amenable to Irv’s suggestion that they work together to find him but is only too aware that the political circumstances of the case and Marcus’s confusion could result in a bloody showdown. Irv does his best to stay in touch as Sigrid takes steps to ditch the US authorities before the chase bears fruit.

As with its predecessor, the author combines great characters and an engaging story with passages that tease out cultural manifestations in both Norway and the US. Miller extracts a great deal of humour out of the differences between the two nations, the dichotomy in style exemplified by exchanges between Sigrid, formal and direct, and the laidback Irv. Sigrid’s bemusement leads her to ruminate on what she sees as the defects of American culture: obsession with individualism, bad food choices, and so on.

A central matter for re-examination is police shooting of civilians. Sigrid considers the matter and gives Irv a detailed analysis, arguing that the way US society operates shifts the risk of violence onto citizens, and that it is the moral duty of the state to better manage and shoulder that risk. Her views will be of interest to anyone who takes the slightest interest in white-on-black shootings in the US, and the public outcry which frequently results.

The crime story is driven along in a most satisfactory manner. Marcus’s unwillingness to do the sensible thing is occasionally maddening, but it is a pleasure to follow Irving and Sigrid, both intelligent and thoughtful protagonists. As to the wider themes, I can do no better than to quote Sigrid: ‘It’s hard to ignore the moose sitting on your waffle.’