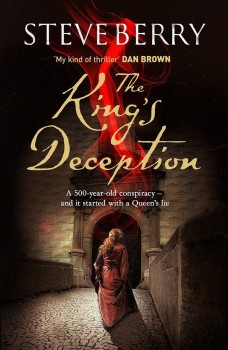 Ex-Justice Department agent Cotton Malone is on his way to Europe with his teenage son when he agrees to escort a young fugitive wanted in England. He is plunged into the heart of a growing international incident – and forced to attempt to solve a shocking Tudor mystery.

Department agent Cotton Malone is on his way to Europe with his teenage son when he agrees to escort a young fugitive wanted in England. When he is greeted at gunpoint and both his son and the fugitive disappear, Malone is plunged into the heart of a growing international incident – and forced to attempt to solve a shocking Tudor mystery.

The basic story is that Elizabeth I, probably England’s greatest ruler, was a man – admittedly still a Tudor – but definitely not a Queen! Berry calls on the legend of The Bisley Boy and some fairly sketchy evidence from Tudor record to support the idea of a 500-year-old plot, originated by father and son William and Robert Cecil, her principal ministers, and perpetrated by the British establishment. There’s also a vast hidden Tudor treasure accumulated by Henry VII and his son!

The CIA has wind of this, realises that if Elizabeth was an imposter then any decisions or grants she (he) made – including the whole of Ulster – are illegal and sets up an operation to prove the case in order to blackmail the Westminster government into quashing the release by Scottish judges of the dying Lockerbie bomber Abdelbaset al-Megrahi. It's a sort of Treasure Island with political intrigue, terrorists and a dodgy oil deal in the background.

I’ve read – and enjoyed – several of the series and this one isn’t too bad; it’s a rollicking airport read as long as you don’t take it seriously. But Malone is definitely over the top and the rest of the characters are from central casting – the standard issue go-it-alone disaster-prone detectives, the urbane, but cold-hearted intelligence chief, the loveable rogue street urchin – and being set mostly in London is open to obvious criticisms. Speech patterns are wrong and silly mistakes – the Serious and Organised Crime Agency, launched with much hype by Tony Blair in 2006 and due to close this year as an expensive failure, is not a British FBI and its operative officers are ex-police, customs or immigration staff, not fugitive would-be barristers from the Inner Temple – distract from the plot.

Americans enjoy rewriting history to suit Hollywood trends – who else could have made heroes out of men like Wyatt Earp, wanted in more states than those in which he was recognised as a lawman, or that egocentric practitioner of ethnic cleansing George A Custer – but Steve Berry, who founded a non-profit organisation History Matters to preserve American heritage, should think again before he launches into another plot which could have a profound impact on someone else’s world. If you think that’s harsh have look at some of the Da Vinci websites – and remember there are still a lot of fanatics hoping to fan the embers of Ulster’s troubles!