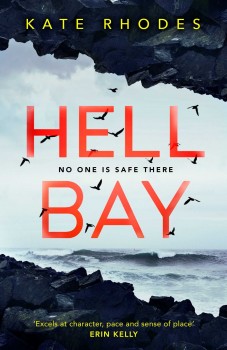 A London detective returns to his childhood home overlooking Hell Bay in the Isles of Scilly, and when a girl is found murdered on the beach agrees to spearhead the investigation.

DI Ben Kitto has forged a career in London, but is considering resignation under a burden of guilt when a close colleague dies, and has come back to his native Bryher Island in the Scillies to reassess his options. He has barely arrived, however when Laura, a girl in her late teens, goes missing. With only 70-something inhabitants, the island’s community is close-knit and shocked by the disappearance, and even more so when she is found washed up on the beach with a stab wound in her chest.

Ben is ready to offer his services to find the killer. The local DCI, Madron, guardedly agrees to him taking charge of the investigation: Ben represents a welcome addition to limited local resources, being both highly trained and familiar with local residents, despite having been away for a decade. That is not to say that Madron is backward in interfering when Ben is insufficiently diplomatic in his enquiries.

With no obvious suspect, Ben and local PC Eddie proceed by interviewing all the residents on Bryher, eliminating those without an alibi. Ben finds a few people to be of particular interest. Lara’s father is a disappointed man who has been at war with his daughter about her plans to leave for an acting career. Her boyfriend is the son of a man seemingly bent on buying up the island, and resented for it.

There are also plenty of weird characters: an old teacher dismissed after accusations of inappropriate behaviour and his demented wife, a painter whose place is popular with the local youth, and even Ben’s uncle Ray, a boatbuilder with a colourful history. Occasional chapters in a different font feature Rose, a herbalist who fears for her son Sam, an ex-footballer now in deep with drug smugglers using Bryher as a transit stop. Sam and Laura broke up over a year ago but recently re-established contact.

The sea, the mist and the island setting provide a context as Ben re-establishes contact with childhood friends, and finds a woman he wants to know better. Several days’ worth of tramping round the island brings Ben no closer to a breakthrough, despite plenty of gritty discussions with the typically tight-lipped locals. Another murder adds to the pressure before the truth is finally revealed.

The physical setting is recreated sufficiently well to make the island sound an attractive place for at least a visit, and the families selected for close study are lively. As far as the crime is concerned, the author juggles several suspects rather too long until the solution is revealed, pretty much by chance, timed at the point where the other plot points have been rounded off. For me the protagonist’s ‘hellhound’ Shadow, a Czechoslovakian wolfdog, was by far the most interesting character.