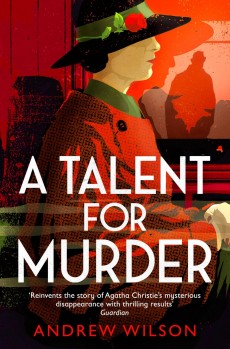 A Talent for Murder

Successful murder mystery author Agatha Christie is blackmailed into committing a murder on behalf of a controlling madman.

On December 3 1926, Agatha Christie, emerging as a major national author after the success of The Murder of Roger Ackroyd, disappeared. Her Morris Cowley car was found abandoned at Newlands Corner, Surrey. For 11 days she was front page news as rumour and speculation ran riot.

What little was known was that Christie left after a confrontation with her unfaithful husband, who left the marital home in Sunningdale to spend the weekend with friends – and his younger mistress Nancy Neele.

It subsequently emerged that Christie had travelled to Harrogate where she registered under a false name – in fact Teresa Neele – at the Swan Hydropathic hotel. She received a parcel there, lied about its contents, and also travelled to Leeds. On December 14 Colonel Archie Christie was told of her whereabouts and went to the hotel where she introduced him to guests as her brother.

The family claimed the author had suffered a serious episode of amnesia. She rarely spoke about it and the whole incident failed to appear in her autobiography. Her notes for her masterpiece Roger Ackroyd novel are missing from her otherwise voluminous archive.
Christie, who was to go on to become the best-selling novelist of all time, left England by ship for Las Palmas on January 23 1927. She and Archie were divorced in 1928.

Those are the facts on which journalist Wilson, better known as the biographer of Patricia Highsmith, Sylvia Plath and Alexander McQueen, bases his second novel, a clever reimagining of what might have happened during the 11 lost days.

Although Christie is his major narrator, he weaves in the stories of Superintendent William Kenward, the policeman obsessed with the idea that Archie Christie had killed his wife, who succeeded only in bringing scorn on the Surrey police and his own career to a humiliating end. There is also that of the 20-year-old highly-strung Una Crowe, daughter of diplomat Sir Eyre Crowe, permanent under-secretary at the Foreign Office. He was one of the architects of the Entente Cordiale with France and among the first to warn that pre-1914 Germany’s expansionist intentions were hostile to Britain, and was found dead at the bottom of cliffs near Swanage on December 19 1926 and whose death was officially recorded as suicide while of unsound mind.

This darkly twisted story of manipulation and murder is both extremely well researched and Christie’s distress at her mother’s death and her husband’s affair is handled empathetically. There is no copying of Christie, no attempt to recreate her style. This is a relatively simple tale, with its fair share of red herrings and equally obvious clues explaining those missing days in an intriguing way and with what is frequently a chilling melancholy

A flustered Christie, in London to visit her agent, waits to board a train, paying little attention to what is going on around her. A touch on her back sends her plunging towards her death – then an intervening hand pulls her to safety. But her rescuer is an insidious blackmailer determined to exploit her genius for imagining murder to kill on his behalf and she must use every ounce of her cleverness and resourcefulness to thwart this evil adversary.

While the plot is not wholly convincing, it is certainly entertaining with an authentic narrative which offers a different take on the traditional murder mystery. The final chapter is set up to be the opening of the next story in the series.