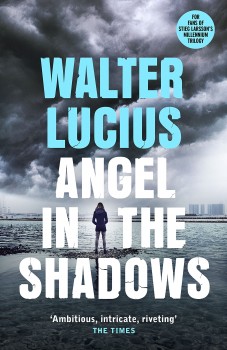 Angel in the Shadows

Journalist Farah Hafez is falsely accused of being a terrorist to undermine her attempts to expose an international web of crime and corruption.

Angel in the Shadows is the second part of a trilogy that began with Butterfly on the Storm. In the earlier book, a hit-and-run involving Lombard, a senior Dutch government minister, was seemingly connected with deaths occurring in a country house nearby that night. Dutch police officers Radjen Tomasoa and Esther van Noordt now delve deeper into the ramifications of those events, but are impeded in their attempts to make progress in the case.

The victim of the hit-and-run was a young Afghan boy with whom Farah Hafez, a Dutch journalist of Afghan origin, made an immediate connection. Her attempts to find who is bringing such children to Europe bring her into conflict with Lavrov, a Russian oligarch with close links to Russian President Potanin. As the book opens, Hafez is kidnapped, and compelled to make a public statement in support of terrorists in an event organised by Lavrov to discredit her.

Hafez narrowly escapes, thanks to fellow journalist Paul Chapelle, and goes to ground in Jakarta. Disoriented as she is by her close shave with death, she is still ready to investigate Lavrov, whose tentacles stretch to Indonesia, where he uses blackmail and bribery to subvert the government and gain a contract for the construction of nuclear power stations. Paul, meanwhile, is working in Moscow, where local journalist Anya Kozlova assists him in assembling evidence of Lavrov’s wrongdoing.

The book moves backwards and forwards between these characters, recording their bravery and enterprise; their successes and their frequent setbacks. All have detailed backstories with plenty of angst arising primarily from doubts about their ability to live up to parental standards. Hafez is the most interesting if only because of her expertise with Penkak Silat, a system of unarmed combat that proves useful.

President Potanin is a Russian president enjoying close relationships with crooks, and it is not hard to imagine who Lucius has used as a model, nor to doubt the possibility of corruption at top levels of foreign governments when you have criminals commanding huge wealth and carte blanche to subvert political economic and political systems. The plot here is thus all too plausible.

There is plenty of menace arising from the implacable nature of the opponent, as well as exciting incidents. If I have a criticism it is that the book reads somehow rather flat, possibly something to do with the translation, and there is perhaps rather too much tell and not enough show.

However, nobody could deny the topicality of challenges faced by the protagonists, and the series features several strong female characters, which is nice to see. The plot lines are intricately interwoven in a way which always excites my admiration, thinking of the hours the author no doubt spent drawing diagrams to ensure he had a dramatic episode to round off each chapter.