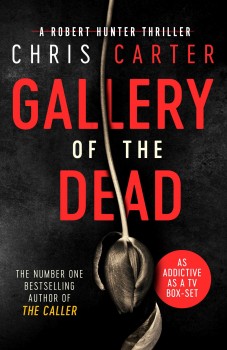 Gallery of the Dead

The man caught by accident in her selfie is last thing Linda Parker sees. The first thing Detective Hunter sees is the man’s horrific mutilation of her body.

Detective Robert Hunter of the LAPD ultra-violent crimes squad has to bring his speech to an early close when he receives a call. A woman has found her daughter dead and dismembered.
Linda Parker’s bedroom is the scene no one would ever want to see. And once seen, it can never be erased from a witness’s memory. The murderer has daubed blood over the walls. They have severed the young model’s hands and feet. They have removed vast swathes of her skin. The little they have left bears strange markings. It doesn’t take long for Hunter to decipher the marks as Latin words meaning ‘beauty is all around her’.
But before Hunter and his team even have time to come to terms with the monstrosity of the crime, the FBI swoops in, taking command of the investigation. It turns out Linda Parker was not the murderer’s first victim. That was the niece of Adrian Kennedy of the FBI.
And the surprises are not over. Despite the scene in Linda Parker’s home, the murderer has shown compassion. Their atrocious acts took place post mortem. And it is looking increasingly as if the murderer sees their work as art. The team knows that passion drives artists, and it won’t be long before the murderer is hunting their next tableau.
The Gallery of the Dead is the latest book in the Robert Hunter series. It’s written in the third person past tense and follows Hunter through his investigation, but there are chapters devoted to other characters. I am sure that had I read the previous novels, I would have a greater connection with this detective. However, even though there is backstory, I found it difficult to relate to the main character because the author’s opinion leaves the detective in the background. Sometimes it is as if Hunter is merely a tool for explaining police procedure and thought-process, not a vibrant character.
I didn’t get the point of Hunter’s girlfriend; her presence did not drive the story forwards. And Fisher, the female FBI agent, is unconvincingly antagonistic. The rest of the cast is underdeveloped, particularly the murderer, even though there are chapters devoted to them. While the murderer may stand out because of their motivation and modus operandi, they are a stereotypical serial killer.
Readers who enjoy minutiae and in-depth explanation will appreciate this book. However, those aspects slow the pacing and the repetitiveness of information feels patronising, as if the reader is being spoon-fed.
It is a story that relies too much on ‘tell’ and clichéd writing, which makes many of the scenes unnecessarily long. It spoils the good balance of dialogue, description and action, and leaves the reader on the outside looking in. Much of the dialogue is mundane and too true to life; it could be cut without affecting the story. The plot is reasonable even though it is a well-worn path, but the cliffhangers at the end of so many chapters resonate of Doctor Who episodes from the 1970s. And the ending jarred my suspension of disbelief.
The Gallery of the Dead could have been a sharp 300-page story and a fascinating journey with an author who knows his subject intimately; Carter’s psychology and police procedural facts seem to be spot on. Unfortunately, as a 500-page book, it is long-winded.