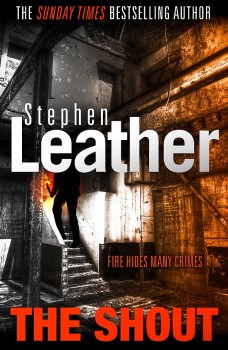 After being badly injured on the job, firefighter Vicky Lewis is shunted into what she sees as a dull desk job, but she quickly learns that the Fire Investigation Unit isn’t quite the dead-end job she’d expected.

Vicky Lewis has worked her way up quickly to a job as a crew manager in the London Fire Brigade. She’s following in her father’s footsteps and even though she’s not yet 30 it’s clear that she’s a force to be reckoned with, even in what is still to a large extent seen as a man’s world.

She’s strong and capable, but she’s also got a tendency to be headstrong, and faced with a choice between sticking rigidly to safety protocols and saving a man’s life, Vicky doesn’t hesitate, even if it means ignoring a direct order. She thinks she can get the job done but fires are unpredictable, and although she does get the victim out of the building, the floor beneath her burns through, dropping Vicky into the flames, with burning debris all around her. She survives, but her looks are destroyed and she loses the frontline career she prized so much when her bosses decide that she’s not the sort of poster girl the brigade are looking for, despite her heroism.

Vicky is shunted into what she sees as a desk job with the Fire Investigation Unit, working with Des Farmer, a man widely believed to be counting down the days to retirement, serving his time terrorising junior officers and generally living down to his nickname of the Grouch. She doesn’t want to be there, and the Grouch doesn’t want a new partner, especially not a rookie investigator who he’ll have to babysit. He also doesn’t want anyone getting too close to him or to the off-the-books investigation he’s been running for a while into the fire deaths of a series of women who all share the same characteristics of being young, blonde and pretty.

It’s clear from the outset that Stephen Leather now knows a lot about fires and the fire brigade and he loses no opportunity to put that knowledge on parade. Info dumps come thick and fast, but they were interesting enough to keep me reading, and his usual sharp eye for characterisation comes quickly into play. With a limited cast of main characters to choose from, I found myself playing spot the baddie during the chapters spent in the killer’s point of view. Making the choice isn’t exactly rocket science, even for someone as notoriously bad at working things out as me, but that didn’t detract from my enjoyment of the book, and even though for quite a considerable time, nothing really happens, I was sufficiently immersed in the details for that not to matter.

Leather tells a good story, and The Shout is no exception. The book is billed as a standalone, but I can’t help wondering whether he’ll resist the lure of putting his new knowledge to the test again. If he does, I’ll be back for the ride.