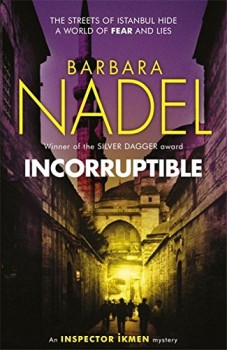 Inspector Cetin Ikmen takes up the case when a young woman from a mixed marriage is found eviscerated in an Istanbul backstreet.

The latest outing for Nadel’s most successful detective explores the resurgence of religion in a society where secularism was once firmly established, bringing conflict in its wake. At the focus of such conflict is the murder of a woman claiming to be a messenger of the Virgin Mary. As the child of a Muslim mother and Christian father, the victim’s celebrity exposes her to suspicion and hatred from both sides.

As usual, Nadel populates the book with large number of characters and helpfully provides a cast list for those who lose track. The most prominent will be familiar to those who have enjoyed earlier books in the series: Ikmen himself; his protégé Suleyman; Gonca, Suleyman’s gypsy mistress; and various police and technical specialists.

New are the murdered woman Maryam de Mango, her father Silvio and his Muslim wife Aysegul, Sivio’s friend Fabrizio and Fabrizio’s wife Lobna. Silvio and Fabrizio are of Levantine descent, Christian by tradition. At one time many religions co-existed more or less peacefully in the city, but increasingly there is friction between Muslims, Christians (both Orthodox and Catholic), Jews and those of other religions. Silvio and Aysegul’s relationship has fallen apart under such pressure.

Asyegul has been harassed by her brothers to wear a headscarf, although she obeys only to keep the peace. As far as Silvio is concerned, however, it is just another indication of rejection. Silvio doted on his daughter, whose supposed miraculous recovery from cancer and visions of the Virgin gave him status. When the autopsy reveals that Maryam was pregnant, Silvio’s dreams are shattered.

As the investigation continues, the narrative moves between Ikmen and his colleagues, and others connected in some way to the death. One site of particular interest is the Catholic Church of St Anthony, served by priests of Italian and Polish extraction, and rejected by Maryam for the Armenian Church of the Assumption, where annual miracles can be reliably expected.

As in earlier episodes of this series, Nadel explores the history underlying the cultural traditions and beliefs of the featured characters, and conveys well the sense of connection with the past. There is always a strong sense of continuity going back thousands of years, with ancient characters or incidents still in the minds of current day residents, not to mention ancient buildings which are still (just about) standing. This is doubtless what Nadel finds so captivating about Istanbul.

The police are not exempt from the new religious orthodoxy, and Ikmen’s superior Commissioner Teker finds herself targeted for being insufficiently responsive to the political bosses who prefer a Muslim way of doing things. She warns Ikmen that he too may find it difficult to remain working under these new circumstances, and indeed the protagonist finds himself at the end of the book faced with a choice.