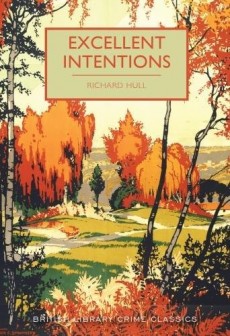 When the disagreeable Henry Cargate is poisoned, an accusation of murder is brought against one of four people in a position to have committed the crime.

Henry Cargate has accumulated a fortune from speculation and has not long been resident in Scotney End Hall on the Essex/Suffolk border when he dies from inhalation of potassium cyanide, which has been liberally mixed into his snuff.

Inspector Fenby of Scotland Yard is called in to investigate and finds that opportunities for adulterating the snuff were limited to brief periods within a single day. Only four people could conceivably be culpable: Miss Knox Forester, a secretary; Raikes, the butler; and two visitors that day – Yockleton, the local minister, and Macpherson, a stamp dealer.

All four have reason to dislike Cargate, who was a thoroughly unpleasant character who took pleasure in baiting others. He held diametrically opposed views to Forester, a pacifist, and regularly accused Raikes of dishonesty. His contempt for the local population brought him into conflict with Yockleton, and his attempts to pass off doctored stamps lead Macpherson to worry about the impact on his trade.

As the book opens, the trial is already at court, and we follow the prosecution case from the death of Cargate, through Fenby’s investigations to the judge’s summing-up and the jury deliberations. What makes the book unusual is that it is only in the latter stages that we find out who is in the dock. The reader is thus enabled to make an unfettered attempt to guess the accused, and to sift the clues sprinkled through the book to find the crucial bits of evidence.

This re-issue as a British Library Crime Classic was written exactly 80 years ago but remains fresh. The prejudices and preoccupations of the judge, leading counsel and Inspector Fenby are excellently brought out through sections making us privy to their deliberations, and the language is precise and a joy to read. At this distance one can’t help feeling that our ancestors were much better at being able to express themselves than many of their descendants.

The book comes with an introduction by Martin Edwards who lauds Hull as one of the most innovative of the crime writers of his time. The so-called ‘altruistic crime’ held a special fascination for writers: Agatha Christie, Anthony Berkeley and John Dickson Carr all played with the sub-genre. In Excellent Examples Hull makes the victim sufficiently detestable that it is difficult to avoid hoping that the culprit, whoever he or she may be, avoids the ultimate penalty for the crime.