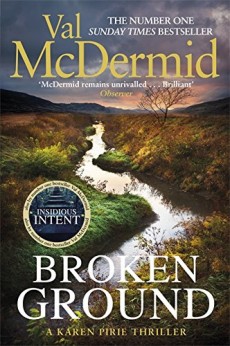 The case of a body found in a peat bog is investigated by DCI Karen Pirie of Edinburgh’s Historic Cases Unit.

DCI Karen Pirie of the Historic Cases Unit is back. She’s preoccupied with watching her back against her own boss, new Assistant Chief Constable Ann Markie – known as the Dog Biscuit to her subordinates. Markie has foisted Sergeant Gerry McCartney on her, ostensibly as the extra pair of hands Karen has wanted, but in reality to spy on Karen from inside the unit. The relationship between the two women is prickly, to put it mildly, and a frosty politeness soon starts to escalate to open hostility, as Karen gets involved in the case of a body found in a peatbog in the Highlands.

Val McDermid’s books are never lacking in a sense of place, but here she excels herself as the windswept, desolate moor conjured up every bleak, deserted Scottish landscape I’ve ever driven through and camped near. Think Rannoch, only more isolated!

The circumstances in which the body is found are unusual to say the least. A woman from London and her obnoxious husband are on the trail of buried treasure left in her grandfather’s will. The treasure turns to be something nicked at the end of the Second World War, and the couple are naturally pretty miffed to be told you can’t gift stolen good by a will. The dead body found buried with the stolen goods is just incidental, so far as they’re concerned, but the two bullet holes are a distinct inconvenience for their hopes of easy money.

Naturally, the Dog Biscuit is all over Karen like a rash when the case hits the papers and Karen is presented in an unsympathetic light. Karen has to handle her crabby boss, an uncooperative team member, and DC Jason ‘the Mint’ Murray, who isn’t exactly the brightest light bulb in the box. Karen sets DS McCartney onto the historic case of a series of violent rapes that culminated in one woman being beaten so badly that she ended up brain damaged and in a wheelchair.

McCartney thinks routine investigations are beneath him and goes about his job with very bad grace. Meanwhile, Karen is struggling with a lack of leads in the bog body case. Progress there is slow, and she’s hampered by confused feelings for Hamish Mackenzie the owner of the peat bog where the body was found. He’s superficially charming, but Karen doesn’t give her trust easily, and she’s still not over the death of her husband, a fellow police officer killed in the line of duty.

The different plot lines are woven together with all McDermid’s trademark confidence and skill, and I was quite happy switching between them, even when the story jumped back in time on occasion to the events at the end of the war which had come to cast a long shadow over the present. I often find time jumps to be an out of place irritant, but there was none of that here. It was necessary to search the past to find the clues to the present, and McDermid is far too old a hand at the crime game to make the transitions between past and present anything less than seamless. Even the inevitable explanations were handled neatly and naturally.

With Broken Ground, DCI Karen Pirie is fully established as a series heavyweight in her own right. She’s tough, intelligent, and likeable and I want to know where she’ll go from here. The scenes when she closes in on the murderer were stylish and entertaining, and I would have given a lot to have been a fly on the wall during the arrest!