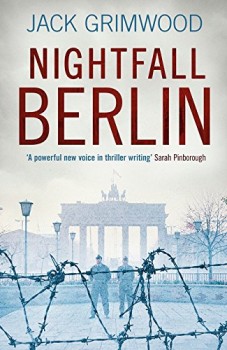 British intelligence agent Tom Fox travels to Berlin to nursemaid a British defector seeking to return to the UK. Things do not go according to plan.

Major Tom Fox is enjoying a break in the West Indies with wife Caro and son Charlie when his holiday is interrupted. Sir Cecil Blackburn, a pillar of the British establishment who defected to the East, has written to The Times indicating his wish to return. Fox is sent to East Berlin to shepherd Blackburn back home.

The year is 1986, with Gorbachev’s reforms underway, but the cold war is still very much in existence and the acquiescence of both the UK and the GDR to the repatriation suggests to Tom that he has not had the full story. Blackburn seems at ease but tells Tom he has changed his mind about returning. Within a few days, Blackburn and his minder are dead, Fox being universally suspected to be the man responsible.

The story takes place directly following Moskva, in which Fox rescued the daughter of the British Ambassador in Moscow. A fluent Russian speaker, he made contacts with a few people in the upper echelons of the hierarchy who come in useful in this latest outing. One in particular, Maya Milova, a sniper at the siege of Leningrad and throughout the Great Patriotic War, proves still to have the means to help Fox out.

While the linear story follows Fox and his efforts to avoid capture while picking up clues to the real murderer, occasional chapters feature other deaths of men in middle age, not always the accidents or suicides that they appear to be. Eventually it becomes clear what connects these men, as well as to Fox and his current predicament, something with a very contemporary feel.

Fox’s internal dialogue also reveals something about his own childhood, and to a particular type of evil with which he is familiar. The impact of his experiences is to make relationships difficult, and guilt following the death of a daughter in a car accident has merely compounded the problem. He loves his family, however, and is distraught when his son Charlie is put at risk. Charlie is an autistic boy with plenty of character and useful skills, and his contribution to the story adds an exciting additional dimension.

The plot is complex with numerous twist and turns. Fox seems equally comfortable (or uncomfortable) in British, East German or Russian company, with friends and foes where you might least anticipate. Unexpected friendships or betrayals complicate Tom’s moves, and with the resources of several states pitted against him, his survival never looks very likely.

Despite the ease with which Fox moves between East and West I found nothing too challenging about the story other than Fox’s sheer endurance. Moskva featured his ability to withstand cold and huge quantities of vodka; here he takes a beating which would kill most people and goes days without sleep, shrugging off the ill effects with a cigarette and a glass or two of surgical alcohol. Nightfall Berlin is most impressive.