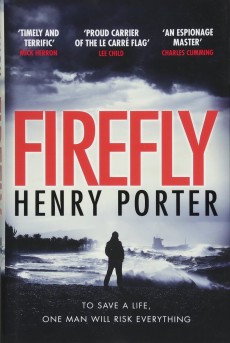 A young Syrian refugee making his way to the West to make a new life for himself and his family carries information about ISIS, who are determined to stop him.

A 12-year-old Syrian boy becomes of great interest to Western intelligence agencies when it becomes evident that his journey from a Turkish refugee camp is being shadowed by one of the most vicious ISIS commanders, Al-munajil. It is suspected that Al-munajil and his men are planning an operation in Europe and apprehending them becomes top priority.

British intelligence recruit Paul Sampson, a Middle-East specialist, is tasked to help find the boy, codenamed Firefly. Paul starts at the refugee transit camp where Firefly was interviewed by a psychologist, Anastasia. She confirms that Firefly is exceptionally intelligent and resourceful, and that despite coming under terrible pressure from Al-munajil he manages to stay focussed on the job of securing a safe place for his family.

The twin narrative strands follow Firefly in his journey across the sea to Greece and then overland through the Balkans, and Paul’s efforts to track the boy and make contact. Firefly’s experiences parallel that of great numbers of migrants making the same trek, suffering the same problems of finding food and shelter and subject to exploitation by inhabitants of the lands they pass through. Some good people on the road provide aid, but the journey is a very testing one.

Paul would like to be able to help, but circumstances conspire to defeat his attempts to arrange a rendezvous. Worse, SIS come to believe that as they are nearing capture of Al-munajil, they no longer need to help Firefly, and take steps to discourage Paul from further action, threatening to leave Firefly exposed. Luckily, Paul’s past activities in Syria have made him some friends who are can help, which proves to be crucial when matters come to a resolution in the mountains.

Henry Porter has gained a reputation for spy fiction from his past works, and the targeting of ISIS in this book no doubt accurately depicts the premier concern of the intelligence agencies at the moment. However, there is not much spying here: the most we gather about the agencies is their rather cynical loss of interest in Firefly when it appears that he has fulfilled their immediate purpose. The chase is, however, an exciting one, with close escapes on every other page.

If I had a problem with the book it is the feeling that the thriller was a fairly thin cover for the author’s wish to proselytise about the problems arising from conflict in the Middle East. The refugees’ plight is emphasised and those met by the protagonist come across as universally sympathetic, while the inhabitants of the lands they are crossing somewhat less. The ISIS characters are incompetent and a joke when they are not being entirely evil. There is a touch of pantomime about it all.