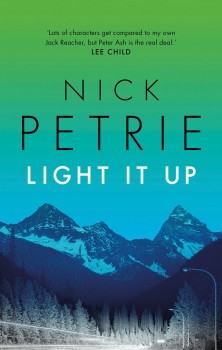 When ex-marine Peter Ash helps an old army buddy riding shotgun on a truck making legal cannabis deliveries, the job calls for all his military skills.

This is the third outing for Peter Ash, an ex-marine still suffering from PTSD which makes him uncomfortable inside buildings. He is making progress and moving away from a life spent almost entirely outdoors when he responds to a call for help from Henry, an old friend from the military. Henry’s daughter runs a firm providing armed escort for the collection and delivery of cannabis and cash. A team has recently gone missing, and Henry is filling in.

Henry, Ash and two others who constitute the new team have nearly completed a run when they are attacked by a very professional gang, and even with Ash’s considerable fighting skills, survival is a close-run thing. Aided by his old friend Lewis, Ash sets out to find who is behind the attack, but the antagonists are closely matched, and a brutal struggle follows before the winner emerges.

Several writers have explored the potential of the returning veteran as lead character; Peter Ash is at the end of the spectrum where signs of military experience both constructive, and not, are at the forefront of the character. He is impressively effective in combat, but always within the bounds of reason, and balanced by his persistent and thoughtful efforts to throw off his demons. Ash is a thinker.

None of this attention to character detracts from the action, which is fast and gripping throughout. There is plenty of weaponry and several characters who know how to handle themselves, including Ash’s long-distance girlfriend June who becomes drawn in to the conflict and proves surprisingly resourceful, not the traditional damsel in distress.

The style is terse and punchy, with short sentences, sections and chapters moving quickly from scene to scene, and from one key character to the next. The dialogue is spare, and descriptions whittled down to a focus on practical details. This type of action writing is now common, but not always done as well as this.

The plot for this story emerges from the current bizarre cannabis supply situation in the US. Several states, including Colorado where this tale is set, have legalised cannabis. But to the Federal Government sale is still a crime, and any bank which handles the accounts of a supplier is liable to prosecution. So cannabis is a cash only business, with profits held in bundles of notes and concealed in ‘granny’s attic’. It is also creating rich pickings for thieves and has given a fillip to the armed transport industry. You couldn’t make it up.