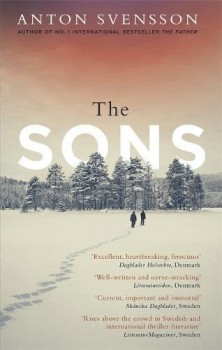 After six years in prison, Sweden’s most notorious bank criminal Leo Duvnjac is free, acquitted of most of the bank robberies he and his two younger brothers pulled off. While behind bars he planned the biggest heist ever. But a bitter cop is on his case.

From the very first pages it’s obvious this is going to be a tough, emotionally intense journey. Fourteen-year-old Leo Duvnjac fervently cleans the kitchen floor. His mother Britt-Marie has been savagely beaten by her husband Ivan who had appeared at the family flat after a long stint in a prison, and he blames her for splitting up the family. Seven-year-old Vincent bandages himself, emptying the contents of his mother’s nurse’s bag in the process. Felix, who is 11, is confused and terrified. The social worker at the door tries to hide her shock. As Ivan calmly awaits the arrival of police, and hopefully Britt-Marie is now safe in the hospital, Leo decides to protect his siblings at all costs, to avoid separation and to use all the skills he has learnt from observing grown-ups – though making a Molotov cocktails might not be required just yet.

Fast forward to when Leo finally leaves prison, having spent six years there. His claim to fame is very specific: he’s Sweden’s most notorious criminal, acquitted of all but two of the ten bank robberies he and his brothers pulled off. He was prosecuted for planting a bomb in Stockholm’s Central Station, plus stealing the huge cache of automatic weapons, making it northern Europe’s largest-ever weapons theft. The weapons were never found.

Detective Broncks quickly figures out that the newly released Leo is up to something and vows to stop him once and for all, no matter what rules have to be broken. Before it is all over, these two men will play out the consequences not just of the crime spree that first brought them into each other’s orbits, but also of their earliest childhoods, when their destinies were being written by violence and abuse.

Each will have to look into the abyss and answer a terrible question: is he prepared to sacrifice everything, even family, to succeed?

While locked up, Leo didn’t waste time as he plotted in minute detail the most outrageous robbery from the inside of Sweden’s largest police station, at the exact time dictated by a court ruling. However, the plan to steal 100 Swedish million crowns and then disappear forever threatens the very fragile relationship with his father, controlling his own anger, and his reformed brothers, then reluctant accomplices, who now want to stay on the right side of the law. Leo also befriended Sam Larsen, a father-murderer, and hates detective John Broncks, his nemesis. The police officer is the only one who suspects something seriously wrong is about to happen.

Anton Svensson is a pseudonym for Stefan Thunberg and Anders Roslund, two accomplished and renowned writers. Roslund, an award-winning investigative journalist, also writes as part of the duo Roslund & Hellström of Sebastian Bergman fame. Thunberg, one of Scandinavia’s most celebrated screenwriters (Henning Mankell's Wallander and Håkan Nesser's Van Veeteren), comes from a family of notorious bank robbers, called the Military Gang but managed to avoid crime. Hence the genuine emotional rawness and deep regret hidden underneath the fast-moving narration. The plot navigates between redemption and revenge which made me switch allegiances: I wanted Leo to succeed with the biggest, most daring heist ever. On the other hand I know how wrong it is to cheer on the hardened criminal.

The Sons, translated by Hildred Crill, and a sequel to Father, is in fact about brothers and guilt. And it's about the boys who grow together, become men, shaped by childhood abuse and violence, trying to establish their role and place in the world, the strong loyalties between them unfortunately indestructible. Britt-Marie, devastated following the latest events, is resigned to the reality. And it’s not just Leo, Vincent and Felix who had no real choice but to learn the language of violence. The infamous Sam Larsen killed his father to stop the horrendous abuse of his younger brother. This real-life story in a fictionalised form is very good indeed.