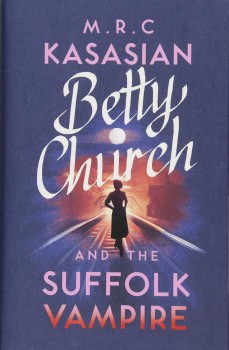 Betty Church and the Suffolk Vampire

Partly disabled Met sergeant Betty Church avoids being invalided out when her godmother March Middleton arranges a transfer to the Suffolk force. She returns to the town where she grew up to find a police station in chaos and a murderer dubbed the Suffolk Vampire on the loose.

In this fifth book, Kasasian has moved the saga on two generations to 1939, with Britain, under the appeaser Joseph Chamberlain, sliding inevitably into another war. His new protagonist is Betty Church, one of the Met’s first women sergeants and goddaughter to the redoubtable Middleton, now an ailing pensioner but still able to call on a formidable reputation to exercise influence in high places.

Despite Church’s own notable record of successes, she is about to be thrown out of the force after losing a hand in what she flippantly – and so far inexplicably – describes as her mishap. Her godmother intervenes with a mixture of calling in favours and blackmail and Church finds herself transferred to Suffolk – and promoted to inspector.

This proves a mixed blessing as she is posted to the crumbling seaside town of Sackwater – where she grew up and could not wait to escape from – and which has never seen a policewoman, let alone one of rank.

The Gower Street series has always been marked by its humour – the acerbic Grice and the somewhat less vicious Middleton – but Kasasian now takes it into the world of ‘Carry On Copper’ with an assembly of the most inept, idle and incompetent policemen that Church must work with and command.

From her boss, the semi-detached superintendent still struggling with PTSD from his First World War experiences, through a thoroughly unpleasant and misogynist fellow inspector to a sickeningly sweet and childish WPC, who cannot ride a bicycle because: “Bicycles are a teensy-weensy bit too wibbly-wobberly for little old me,” every stock character is there. There’s the tea-swilling long-service sergeant, the hypochondriac, a pair of wimpish and probably homosexual twins, the officer who thinks ‘hands on’ policing means hands on women, and the just plain thick. Church has definitely inherited the sweepings of every force.

She must also deal with her middle-class parents, the main reason for her leaving. Her semi-competent and failing dentist father – a none too subtle dig by Kasasian at his own final former profession – and her self-centred, none too bright mother have never been able to cope with their strong, independent and adventure-minded daughter, but fall instantly for the little girlish charms of WPC Dodo Chivers!

Crime in Sackwater is at a low ebb. Having solved the case of the missing buttons, Church is called to the station to investigate a missing bench, only to find the body of a smartly dressed man, murdered in broad daylight, with two distinctive puncture wounds in his throat. More similar deaths follow and as the superstitious locals, whipped up by journalistic excesses, begin to talk about the Suffolk Vampire, Church realises that she must somehow organise her mismatched team to hunt a dangerous killer.

Grossly OTT and occasionally annoying some of the characters may be, but Church is a worthy successor to March Middleton – clever, funny, mysterious and brave. In this eccentric and entertaining story Kasasian has laid the groundwork for another successful series featuring a strong, confident and witty woman.

A nicely complex plot, some genuinely funny moments and some serious observations about the approaching war are balanced by an underlying darkness. Kasasian is frequently on the verge of straying into total slapstick, but always drags the reader back to the central business of bloody murder, no matter how many twists, turns and false leads. Sackwater and the frequently unknown wilds of the Suffolk coast, with its marshes, dying towns and clannish, superstitious people are an ideal setting which he explores brilliantly.

Readers, myself included, who can get past Church’s collection of eccentrics and music hall humour will want to know what her next case will be – and a good deal more about her past.