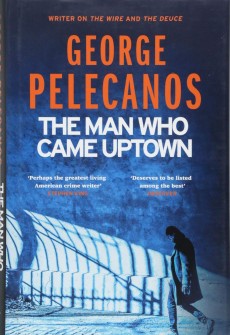 The Man Who Came Uptown

Michael Hudson is a young man in a Washington DC jail, granted the opportunity to start again, to come uptown, but facing a significant challenge on his way there.

Michael Hudson is a young black man in his mid-20s from a law-abiding family who is emerging from a period of rebellion, only to be caught after an ill-advised robbery. Michael was only the driver but as part of a team wielding firearms he faces a long term of imprisonment if convicted.

Michael bitterly regrets becoming involved in the crime, which he knew was stupid. While on remand he meets inspirational jailhouse librarian Anna, and with her help becomes a keen reader. Anna takes the trouble to find out what books speak to her charges as individuals, and selects volumes that keep them interested.

Michael is unexpectedly released when the robbery victim suddenly announces that he will not testify. The change of heart has much to do with Phil Ornazian, a private investigator. Ornazian has a second line of activity with ex-cop Theo Ward, sticking-up pimps and other criminals who are in no position to seek redress from the police.

Michael emerges from jail determined to get straight: he finds a job, works hard, and reads and thinks a good deal. Then Ornazian shows up, explains to Michael the favour he has done him, and insists Michael handles the car on the next job planned by Ornazian and Ward. Ornazian can still push the witness against Michael to reverse his refusal to testify, so Michael has little choice.

George Pelecanos has a deservedly high reputation for his books and writings (notably for The Wire) and this latest is as good as anything I have read. As usual it is set in east Washington and environs, which the author evidently knows so well. His characters are entirely convincing and the narrative is packed with specific cultural references: film, music, books, dress, all very precise as to time and place. The author’s interest in such minutiae as the brands of shoes or jeans worn by the protagonists, and their choice of particular musical tracks, is typical.

In fact his enthusiasm for information spills over, so that for example he gives Ornazian a tendency to lecture on the history of sport and the origin of names. We also get a review of his favourite books, thinly disguised as the selections of Anna, or as writing playing a key role in Michael’s journey to maturity. Bibliophiles will enjoy his choices, which provoke either a nod of recognition or a determination to root out copies.

None of this interrupts the smooth unwinding of the plot, however, as Michael displays expertise as a driver but remains at risk as long as Ornazian compels him to participate in armed robbery. As the book moves to a dramatic close there are signs that Ornazian and Ward may call a halt, but perhaps have left it too late.