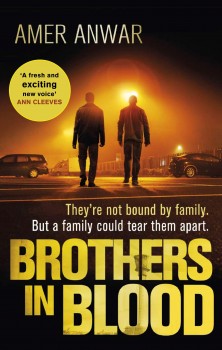 Zaq Khan’s criminal record consigns him to a driving job and things get worse when his employer directs him to recover an absconding daughter, or else.

Zaqir Khan, known as Zaq, has only been back in circulation for a few months after five years inside following a pub brawl when an unsuspected vulnerability left an assailant dead. Since his release the best job he has managed to obtain is as a driver for bad-tempered builder Mr Brar.

Life takes a further lurch downwards when Brar instructs him to find and return his daughter Rita, who has escaped the family home, an unforgivable slur on the family honour. Brar threatens that in the event of failure to perform he will tell police that Zaq has stolen from the firm and used violence, which would be enough to guarantee him an early return to prison. Brar’s two thuggish sons Parminder and Rajinder reinforce the threat.

With minimal information to go on Zaq starts making a few enquiries and in fact it takes most of the book before full details emerge of what has been going on. However, he very quickly finds that the interests of Parminder and Rajinder do not coincide with those of their father and satisfying one party would put him in danger with the other.

Zaq eventually makes contact with Rita, and her situation is equally problematic. Her father insists she return home and marry the boy her parents have selected, but even were she prepared to do so the lies of her brothers would consign her to purdah at best, and possibly injury or even death. At the same time, she can escape only by breaking completely with her old life and identity, not an easy thing to do.

Zaq’s problems are compounded by an assault on the street by three men for reasons unclear, although apparently not related to the Brars. A repeat the following night leaves him again badly bruised and spared something worse only by the training he developed while inside, which makes him pretty effective at street fighting. Beset by several apparently irreconcilable challenges, Zaq is called upon to use some smart thinking to extricate himself and Rita.

Luckily Zaq has a few pals, mainly Asians nominally of a variety of religions and all living in the general area of Hounslow or Southall. The food they consume will be familiar to those who frequent Indian restaurants and is made to sound very tempting. While they display marks of their heritage, Zaq and his contemporaries have little time for the religious distinctions and cultural disputes which their parents find so absorbing.

Zaq is faced with multiple hostiles on several occasions and survives by the skin of his teeth through exciting but realistically depicted events. At one stage there is a very nasty scene involving someone being tortured for information which some readers may care to skip over, but otherwise this is an impressive debut novel with plenty to enjoy.