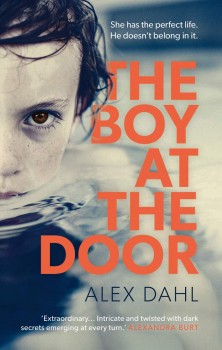 The Boy at the Door

Cecilia Wilborg’s picture-perfect Scandinavian life is threatened when a small, lonely and vulnerable boy enters her world. She’s determined to protect her family and status in the wealthy Norwegian town, and takes extraordinary measures to keep her dark secrets hidden.

Cecilia Wilborg’s life is a complete pure Scandinavian perfection. Handsome hard-working loving husband Johan. Two beautiful confident daughters. Au pair. Impeccably styled big house, overlooking stunning coast. Regular tennis matches, dinners and parties with slightly jealous girlfriends. Some sadness following her father’s departure to Sweden. No need to work hence freelance interior design jobs when suitable. A certain status in an affluent picturesque town of Sandefjord. Hygge, eat your heart out.
Of course the gloss hides dark secrets which start to float to the surface when a small, friendless and desolate eight-year-old boy Tobias appears in Camilla’s carefully curated life. When collecting her daughters from the local swimming pool, she is asked to drop Tobias home as it seems that his parents have forgotten about him.
Cecilia’s immediate panicky reaction is to refuse and run away. She reluctantly takes him to an address where an abandoned uninviting house awaits. Shocked by the sight of it, she decides that Tobias will spend one night at her home after the boy had begged her not to contact police or social services. The following day she drops him at school but soon enough she finds out that he’s not registered there. In fact there’s no record of his existence and his dark skin implies that he might be a Romany or a refugee.
The authorities get involved, especially when Annika Lucasson’s drugs-ridden body is found, pointing at some connection with Cecilia.  As her shocking past is about to be laid bare for the whole town to see, she resorts to some drastic measures while surviving on a cocktail of alcohol and prescription pills. Always immaculate and never showing any cracks in the idyllic existence, she is also the perfect narcissist, determined that the unwelcome visitor will not destroy her family, even when she acknowledges her growing feelings for the lonely vulnerable boy.
Three voices in The Boy at the Door tell the story of three diverse lives with a common thread of one monumental mistake. Whether it was just a mistake or an intricate plan, the event shook foundations of several people’s existences. Cecilia’s explanation and quick spiral down into mental instability is shocking as she struggles to keep her family together at any cost.
Tobias’ sorrowful account is an effort to understand what’s happening. He has seen and experienced far too much violence and grief to be able to trust anyone.The final miserable perspective is a diary of Swedish woman Anni whose stable childhood on a farm in Munkfors, not too far from Norwegian border, ended with the death of her parents and a series of foster homes. Heavy drugs and prostitution followed.
In this psychological thriller the American-Norwegian Alex Dahl touches on drug abuse, mental illness and attitude to foreigners. The author also captured the conflict between the apparent social norms of Norwegian society where everyone wants to fit in versus the desire to be different.
She adds some twisted black humour and creates a tense narration that will keep readers intrigued and wondering how to approach the main character who veers from ‘Johan will forgive me’ to ‘It is no little feat to single-handedly bring junkies, drug abuse, abandoned children and murder to a small, wealthy town in Norway’. If you like Camilla Läckberg’s feel for the location and domesticity mixed with the unpredictable twists, The Boy at the Door is definitely for you.