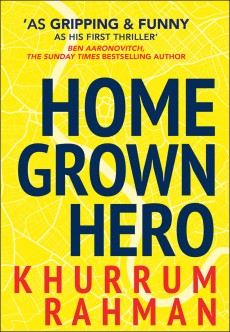 Javid Qasim helped to foil a terrorist attack but neither MI5, who compelled his assistance, nor the terrorists are prepared to leave him alone.

Javid, or Jay as he prefers to be known, was a small-scale drug dealer targeted by MI5 to infiltrate the Ghurfat-al-Mudarris terrorist organisation: East of Hounslow relates how he achieved his goal and foiled an atrocity. He now wants to be left alone but his estranged father is head of the al-Mudarris and neither they, nor MI5, are prepared to give up the opportunity of using him for their own purposes.

Living in the same London district of Hounslow is Imran Siddiqui, known as Imy. To all appearances he’s another westernised man of Pakistani heritage, with a white girlfriend that he conceals from his aunt Khala, but he is in fact a sleeper for al-Mudarris. He was orphaned at the age of six when his parents were killed by British soldiers and brought to the UK at the age of ten, since when he has been waiting for instructions which will enable him to extract revenge.

Besides these two main characters, we are also given glimpses of men in three groups with a definite agenda. Within MI5 Teddy Lawrence believes that his superior’s decision to terminate links with Jay was a mistake and he is keeping Jay under observation. Al-Mudarris is subject to a takeover – since Jay’s father Abdullah Bin Jabbar was exposed by his son he has been on the run, and others are seeking to bring about the death of Jay for his role in upsetting their plans.

The third is a small group of skinheads keen to take action to keep their country white. Simon and Anthony are bullies with limited intelligence, but their enthusiasm has been noticed by older men with a wider reach. A more sympathetic character is Daniel, a younger man looking to belong but who realises that the actions he gets drawn into are something he cannot live with.

As with the first book in the series, the protagonists are drawn as young men with interests much as young men everywhere, sometimes selfish but at bottom good-hearted. The strictures of Muslim traditional behaviour operating within British society make life complicated but considering the particular pressures on Jay and Imy they seem very decent. Given the shadows gathering around them, however, a happy ending looks remote.

In a post-script the author acknowledges that his second book has been difficult to write, but I think that in the end he has produced something which at least matches the quality of his first. There are multiple conflicts: Jay gets involved with young Muslims at the local community centre who fall victim of the skinheads and plot extreme retaliation, Imy struggles to reconcile his various obligations, and a murderous dispute between the leading lights of al-Mudarris boils over, producing plenty of tension before the end.