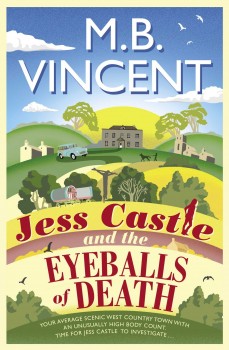 Jess Castle and the Eyeballs of Death

Jess Castle PhD, historian and failed lecturer, returns to her home town of Castle Kidbury and becomes involved in a series of gory murders.

This debut is itself a mystery. Who is MB Vincent? What is this strange, yet quite compelling, story which combines a very untraditional mixture of cosy mystery, humour, romance and more than a little gore?

Some basic detection reveals Vincent is wife and husband team Bernadette and Matthew Strachan. She has written romantic fiction as Juliet Ashton and Claire Sandy. He writes songs and TV theme tunes. They’ve written musicals together. They work at opposite ends of their house, but met in the middle to launch a trilogy featuring Jess Castle, PhD, historian and lecturer and Castle Kidbury, the West Country’s bloodiest market town.

They write alternate chapters, then review each together to make sure the author’s voice is consistent. Each has the power of veto, but claim they never argue! Both love comedy, horror and thrillers along with soaps – and Castle Kidbury is home to all these. Where else could the police station be except at the end of Margaret Thatcher Way?

The most obvious way to describe this remarkable debut is The Vicar of Dibley meets Midsomer Murders with more than a bit of Hammer House of Horror thrown in to add a touch of real noir.

Protagonist Jess Castle PhD doesn’t fit in at Cambridge, so runs home with her tail between her legs to Castle Kidbury – a town named after her aristocratic family – only to find she doesn’t really fit in there either. She’s uncertain of herself, haunted by a childhood nightmare, nosey, bored and massively annoying to her father, the retired and widowed His Honour Judge James Castle QC.

Castle Kidbury, normally full of small town petty gossip, has been hit by a spate of gory crucifixions and suspicion falls on a pseudo-hippy cult camped on the edge of town. Jess attempts to infiltrate the cult and manages, not for the first time, to get arrested. Rupert Lawson, a crush from schooldays and now a barrister, bails her out. The reluctant Rupert is dragged in to help her as she gatecrashes the by-the-book investigation being run by DS John Eden.

As bodies begin to pile up, there seems to be nothing to connect the victims. But the intuitive, eccentric Jess, with her academic expertise in pagan rituals and symbolism, has the nose of a detective and finds herself caught up in the police investigation.

The mystery is well plotted and pacy and small town life provides plenty of amusing passages and characters, but some readers may find the abrupt switches between cosy and noir a little too uneven – the eyeballs of the title offer an indication of the level of noir.

There’s also, as might be expected, quite a lot of tragedy in the past lives of the townsfolk which again jars with the more humorous elements. But although it doesn't necessarily all hang together, overall this is a book to enjoy, perfect for long winter nights on the sofa, with the genre combinations and a cast of quirky characters producing a fast-paced, fun narrative.

Although Jess, who describes herself as a ‘delicate weed’ and seems to spend much of her time dressing the part, cracking jokes and teasing people, also comes across as a sensitive, insightful character –  a real triumph for the Strachans who have created a unique character, with a suitably wacky cast of friends.