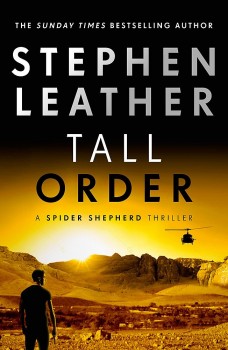 Dan ‘Spider’ Shepherd puts his extraordinary memory to the test when he’s tasked with the search for the terrorists behind a suicide bombing at a football stadium.

Ex-SAS hardman Dan ‘Spider’ Shepherd is back, but in the wake of the death of his former boss, he’s been shunted sideways into a desk job with the Met’s Super Recogniser Unit and told to put his near eidetic memory to good use tracking and exposing terrorists.

The work is valuable, but Spider wants to get back to the frontline and doesn’t relish piling on the pounds in front of a computer screen for the rest of his working life. A suicide bomber at a packed football stadium gives Spider the chance to shine in his bosses’ eyes again as he uses his skills to track the jihadists responsible for the outrage.

Tall Order is a classic Stephen Leather thriller with bags of technical detail to lend authenticity and a fast-paced plot that shifts between the present day and events ten years ago in the US when terrorists brought down a plane with a Stinger missile, killing everyone on board. Both storylines are driven by revenge, but the extent of this theme only unfolds gradually and subtly.

But that’s about all that is subtle. The book is skating on thin ice when it comes to its depiction of Muslims and is likely to inflame the passions of the rampant Brexiteers and readers of the Daily Mail who seem to believe that anyone wearing a headscarf or visiting a mosque should be shipped out of the country on the next available transport.

The violence is getting harder to take, although I still have a sneaking fondness for mercenary Lex Harper, who always asks how high when Charlotte Button, Spider’s former handler now working in the private sector, tells him to jump. I’m not wholly sure I believe in a government-sanctioned private sector black ops outfit, but against the backdrop of chemical poisoning in Salisbury, it’s hard to call anything too fantastic to be believed.

Lex is more ruthless than ever and there were times when I wanted to look away. The same was true of the scenes involving the American, Richard Yokely, as he goes about tracking down and ruthlessly eliminating anyone involved in the attack on the plane. Tall Order certainly isn’t for the squeamish, and I’m finding aspects of the series hard to take now, particularly the casual racism that seems to pervade the books, but that might well be a reflection of the backdrop against which they are now being written.

The final showdown in caves on the Afghanistan-Pakistan border was nail-bitingly tense, with some excellent action scenes. Spider clearly enjoyed his return to active service and so did I, even though I was left questioning the morals of just about everyone in the book, apart from the tough but likeable SAS captain tasked with keeping Spider alive.