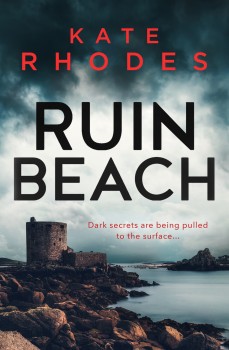 When the body of a diver is found in a sea cave on the island of Tresco in the Scillies, DI Ben Kitto is called in to investigate.

A diver venturing alone into a sea cave at night is never going to end well in fiction, as Ruin Beach ably demonstrates. The woman, Jude Trellon, ends up dead, her body left anchored to the rocks, bobbing miserably in the tide.

When the body is spotted by a fisherman the following morning, DI Ben Kitto, deputy chief of police in the Scilly Isles, takes a risk to get from a boat onto the rocks to drag it out of the water in Piper’s Hole, and then has the task of breaking the news to the woman’s family.

Tresco is a close-knit community and word of Jude’s death spreads quickly, but what isn’t made public at the start is the fact that she was killed by having an ancient statuette rammed down her throat, turning the case immediately into a murder enquiry.  The macabre nature of the killing is ramped up by a weird message in a bottle found with her, containing a verse of an old sea shanty.

This is the second death in Piper’s Hole in a year, as the previous November a local woman misjudged the tide and was cut off by the sea and drowned. Naturally, where deaths in caves are concerned there are no such thing as coincidences. I will admit that I was drawn to Ruin Beach by the mention of a cave and the prospect of adding another cave-related novel to my already groaning at the scenes shelves of caving fiction.

Kate Rhodes does an excellent job of invoking the dark, tide-lashed interior of the sea cave, with the ever-present threat from high waves and treacherous waters. I’m not familiar with the geology of the Scilly Isles to know whether sea caves are found in granite, but the descriptions were suitably dark and brooding, and I was even prepared to give a free pass to the outdated use of aqualung as a term in the prologue.

As well as satisfying my ever-present desire for caves in books, Ruin Beach delivers an excellent police procedural set in a landscape and a community that author Kate Rhodes clearly knows intimately and loves. DI Ben Kitto comes over well from the start. He’s brave, occasionally impulsive, and always likeable. He has some problems in his backstory but doesn’t lug them around in an over-stuffed rucksack. The hassles he gets from his rather stuffy boss never become too much of a cliché, which was a relief. He also has a dog, another thing that usually never ends well in crime fic, but happily for me, Rhodes bucks that trend, too, which was an even bigger relief!

There were times when I struggled a little with what at first seemed to be rather intrusive and unlinked passages from another point of view, but gradually the relevance of this came clear. Stylistically, this is something that I could have done without, but as with prologues, this is a case of your mileage might vary. There’s a touch of talky-talk about the reveal at the end, as a lot of disparate strands have to be drawn together, but by then I was thoroughly caught up in the story and was keen to know how it all fitted together.

Ruin Beach does an excellent job of portraying an island community with all its strengths and pressures and in Ben Kitto, Rhodes has an engaging main character who can simultaneously fill the roles of both islander and incomer, as he’s only recently returned to the islands after working in a murder squad in London, so he can straddle both sides of the divide.

I ended the book wanting to visit both the Scilly Isles and Piper’s Cave, so that’s a thumbs up from me. The local tourist board have nothing to fear from Rhodes’ presentation of their patch!