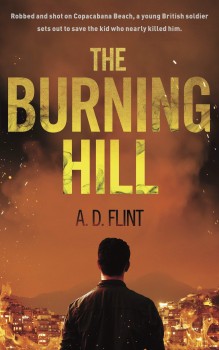 An encounter between a young British soldier and a couple of street kids on Brazil’s Copacabana beach has fateful consequences.

British soldier Jake is in Rio de Janeiro escaping the problems generated by his refusal to bury a military blunder during his service in Iraq which resulted in the death of fellow soldiers. On Copacabana beach after a late-night drinking session he is mugged by two street kids and shot in the face.

Unfortunately for the two boys, the police are soon on the scene, and one, Babao, is shot by Marinho, a corporal. Marinho’s captain, Nogueira, has no sympathy for the boy and makes sure that he never survives to receive medical treatment. The shooting is witnessed by Eliane, a lawyer, who protests at the treatment the arrested boy is receiving, but is forced to postpone any action until a later time.

The other boy, Vilson, escapes. Vilson has been on the street without family since a young child, held from despair only by the letters received care of a priest, letters in which his mother promises she will return for him. Vilson lives a hand-to-mouth existence in a hillside favela, intimidated by Anjo and his gang who use violence to exert control.

Jake’s time in hospital proves to be fortuitous since the doctors find an aneurysm which is easily treated, but undiscovered would most likely have burst at some future date, with death the result. Jake leaves hospital with the determination to help Vilson, and takes a long trip across the country to find Vilson’s mother and reunite her with her son.

The rest of the book depicts the efforts of three sympathetic characters – Jake, Marinho and Eliane – in their attempts to help Vilson and to thwart the machinations of Nogueira and Anjo. Unfortunately these latter two operate entirely out of self-interest and exercise considerable powers without compunction. Adding to the problems of the protagonists is the increasing mental instability of Vilson, who is hearing voices warning him about his new friends.

This is not a book which is likely to encourage visitors to Brazil – the focus is entirely on the poor and disadvantaged. The favelas come across as truly terrible places, not so much for the lack of facilities and precipitous slopes or vulnerability to natural or man-made disasters, bad as these things are, but the way in which power devolves to the most aggressive bully. Out of the urban areas things are worse, if anything, with the poorest living in a kind of slavery.

The unremitting emphasis on the worst aspects of Brazil does, however, add drama to the plight of Jake and his friends, and the action barely slows. Jake gets beaten up more times than I was able to count even while recovering from the initial bullet wound which has disfigured him, while Marinho is forced into a mixed martial arts bout which is as brutal as anything I have read for a while. The Burning Hill is nasty but gripping.